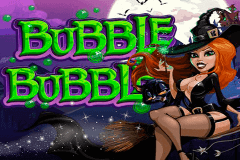 Developed by the team at Real Time Gaming, Bubble Bubble is a video slot with the theme of spells and potions. While this is hardly the first time that this theme has appeared, the first thing that hits you is that this slot is very slick in its appearance, but it needs more than that to survive in this industry.

The slot comes with 5 reels and offers a total of 50 paylines which is higher than you may have initially expected. The reels are placed against the gates to a cemetery, which fits in with the idea of this being linked to Halloween, while the symbols themselves further accentuate the theme. In other words, look out for spell books, black cats, pumpkins, witches, and anything else you care to associate with that time of year.

How to Play Bubble Bubble

Playing this game means you start off by selecting your coin size. This can be changed by clicking on the relevant buttons. You don’t need to worry about the addition of paylines as you are going to be playing all of them, so RTG has certainly sought to make things as easy as possible. After selecting your bet size, hit the spin and see what happens with the reels.

The game has several bonus features including both wilds and scatters. The witch symbol acts as the wild, and she’s going to appear on reel three. If she does appear, then she turns all of the other symbols on the reel, apart from the scatter, as this is an expanding wild. By doing this, it boosts your chances of grabbing some winning lines.

Talking of the scatter, then it’s the cauldron that you need to pay attention to. Also, land three or more of them and you will then be giving one of three different scenarios, the Bewitched, the Wild Witches, or the Great Ghosts.

If you get the witch’s option, then you win 9 free spins. Also, if the witch symbol then appears, she throws a spell over another reel to turn that into wilds.

If you get the ghosts option, then you win 20 free spin and a maximum of 9 wild ghosts will also appear. They act like a normal scatter symbol leading to them changing any symbol aside from the scatter itself.

Finally, the bewitched option gives you 7 free spins while the witch symbol fills the middle reel.

Betting and Payouts for Bubble Bubble

The coin range here starts off as low as 0.02 and goes as high as 1 per line, so that is a huge variation. The jackpot is set at 3000, which is quite good for the bet range even though there are higher-paying slots out there. However, with various multipliers and bonuses available in the game, even lower combinations can still score big.

Bubble Bubble is a Halloween based slot game with a wide range of bonus features that are set to keep you entertained. While the payouts may not be as big as you would like, there are still ample opportunities to grab some wins without breaking the bank in the process.