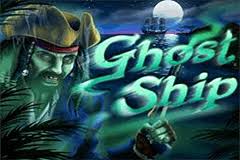 Created by Real Time Gaming, ‘Ghost Ship’ takes us onboard the legendary ghost ship called ‘The Flying Dutchman’. With this game, the creators have sought to add a spooky feel to it as seen by the graphics which may not be as smooth as other developers, but they still strike a chord. Oh, and the captain has some kind of resemblance to Jack Sparrow.

Ghost Ship runs over 5 reels, and it offers a total of 25 different paylines. During the game, you encounter symbols such as figureheads, the spooky captain, cannons, the ship bell, and a whole lot more. The reels themselves are set over the seven seas with that familiar-looking pirate to either side. The feeling is dark and moody, but at the same time, the game itself is highly enjoyable.

How to Play Ghost Ship

Playing the game is straightforward and makes use of a simple interface. Place your bets, choose the number of lines, and then hit spin. Of course, as the number of lines increases so does the total bet, but they make sure that it’s clearly displayed at the top of the screen. Everything here is well laid out and it’s easy to be fully aware of what’s going on before you go ahead and spin.

Ghost Ship has several bonus features that can introduce either free spins or boosting your winnings. One symbol you want to get is the captain who acts as the wild symbol. Also, the ghost captain can cover every symbol aside from the scatter and will increase your chances of having a winning spin.

Speaking of the scatter, land the ghost ship and receive 2 free spins for each ghost ship symbol. Land 4 ghost ships at the one time and as well as the free spins, you also double your winnings. Get 5 and your winnings increase by 10x, which is a pretty good return on your bet if you are lucky enough to land this bonus.

Aside from those two bonuses, there’s nothing else to report with a bonus, so don’t expect a second screen to pop up at any point.

Betting and Payouts for Ghost Ship

Ghost Ship could very well be the perfect slot game for you if you enjoy the world of pirates and pirate ships. It’s smooth, offers enough free spins and the potential for increasing your winnings to keep you interested, and overall it’s quite a cool game for both experienced slot players as well as those new to the idea.