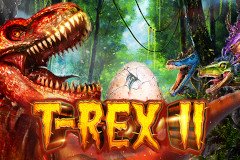 Realtime Gaming released T-Rex II in September 2019 as a sequel to the 2009 T-Rex. It is coming after avid players requested a follow-up to the exciting T-Rex. RTG promised players a richer user experience with the new release, and they did not disappoint. The main difference that can be spotted from both versions is the type of Dinosaurs. T-Rex features three plant-eating Dinosaurs, while T-Rex II introduced meat-eaters, making it a tad scarier.

The update still retains the pre-historic Dinosaur theme. Nothing much has changed from the design that is seen in T-Rex. The pre-historic jungles still serve as the background. There are, however, some improvements from the original title. These improvements are in the area of music, atmosphere, and overall style of the game. Most importantly, the interface is still easy to understand and use, making your gaming experience a smooth as possible.

How to Play T-Rex II

T-Rex II is also a 5-reel, 3-rows progressive slot with 25 active pay lines. It can now accommodate high rollers as the maximum wager per spin is pegged at $125, with the minimum being $0.25. The coins usable are between 1 and 25 to cater to each of the 25 active lines. However, the coin value changes as you increase your bet. The maximum coin denomination is $5, which translates to a maximum bet of $125.

The gameplay is easy to understand and can be very rewarding. If you are a big fan of the pre-historic era, then this is a game you would enjoy playing.

Some updates were made from the previous title, but most of the bonuses remain the same.

T-Rex still serves as the Wild symbol in this version. It is now easier to differentiate T-Rex from other Dinosaurs as one is a furry angry-looking meat-eater, while the other is a small but fast and deadly meat-eating Dinosaur. Also, the Wild now comes with a 2x multiplier. It can still substitute for all other symbols except the Scatter. The Wild symbol now appears only on the first reel and is quite beneficial to increasing your payroll. As it was in T-Rex, you get a jackpot of 10,000 coins if T-Rex appears five times on an active pay line.

The need for mobile gaming has increased over the years, and T-Rex II also fulfills that need. The game is compatible with every mobile and desktop device including, iOs, Android, Mac, etc. It is worth mentioning that it loads quickly on Android devices. The Return to Player percentage is 95.5%, about the same rate as T-Rex.