Online gambling is 100% legal and regulated in New Jersey, and players can participate in online sports betting, online casino games and online poker for real money at authorized sites while inside state borders. 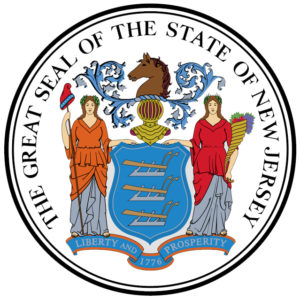 As far back as the 1800s, New Jersey was a gambling hub, though the state government put a stop to it in 1844 by banning everything but horse racing. And pari-mutuel gambling was then banned 50 years later, though Freehold Raceway still stood – and today remains the oldest track in the US. As the 1900s began, gambling took place underground, but pari-mutuel gambling was legalized again in 1939, followed by bingo and raffles for non-profit organizations in 1953, amusement games next, and the lottery again in 1969.

In 1974, voters in New Jersey decided against casinos in their state, but they changed their minds two years later when they voted for casinos in Atlantic City only. The first casino opened several years later, and more were built in the decades that followed. As the number of them increased, so did the kinds of gambling that were allowed there. By 1994, slot machines, table games, simulcast races, and even keno were all legal and thriving.

The next big step for gambling expansion in New Jersey came in 2013 when lawmakers legalized internet gambling, which included poker and casino games. Legislation had taken years to produce a bill that met the standards set by then-Governor Chris Christie, but the final version passed in February 2013, making New Jersey the third state to offer online poker and the second for internet casino gaming.

The online gambling law was put into Title 5 of the state’s statutes with numerous restrictions to keep gambling within New Jersey’s borders, ensure the upstanding reputation of operators, and help rehabilitate Atlantic City after tough economic times. Even so, the law does not consider online poker a game of skill, as dictated by Chapter 19 of Title 5:

With the New Jersey Division of Gaming Enforcement quick to develop regulations for the new internet gaming industry, the first gambling sites launched in November 2013. In the years since, most sites have remained in place, and the sites now in operation – including PartyPoker, 888poker, Betfair, and PokerStars – generate significant monthly revenue for the state. By the end of 2017, the lifetime amount exceeded $772 million.

As the industry neared its four-year anniversary in October 2017, an announcement was made that New Jersey’s governor signed an agreement with his counterparts in Delaware and Nevada to begin a three-state online poker network. And in addition to poker liquidity, the progressive games on Delaware and New Jersey’s sites would join to enable even larger jackpots.

The tri-state network launched in May 2018 with WSOP on the 888 platform as the only site available in all three states. This allowed players in the three states to share online poker tables in cash games and tournaments.

Another step taking toward expanding the New Jersey market came from now-retired Senator Ray Lesniak, who proposed a bill in 2017 to allow New Jersey to share poker and jackpot liquidity with other markets throughout the world. Talks with the UK in the past had fallen apart due to a requirement that servers be located in Atlantic City, but the bill would have removed that requirement and opened the market. Lesniak retired, however, and no one took up the legislation to promote international liquidity.

New Jersey legislators voted to authorize daily fantasy sports (DFS) in 2017, but it was sports betting that has been in the works for many years. It started in 2012 with Governor Chris Christie and members of the state legislature pursuing legal sports betting in Atlantic City. However, the federal government’s Professional and Amateur Sports Protection Act of 1992 (PASPA) stood in the way by allowing only four states to dabble in sports betting, and New Jersey was not one of them.

So, Christie took his case upward through the court system, taking on professional sports leagues in the United States that originally opposed the New Jersey plan. The case eventually went to the US Supreme Court, and arguments were presented in 2017. As of April 2018, Americans watched and waited for the final decision.

It took five years, but nonetheless the state of New Jersey won the lawsuit that dismantled Nevada’s monopoly on legal sports betting.

Yes. As of June 2018, Sports Betting in the state of NJ was signed into law and first legal bets took place only a few days later.

There are numerous regulated sites available in New Jersey for online poker and casino games.

New Jersey has taken steps to keep offshore internet sites out of the new state market by working with regulators and licensing bodies in places like Canada to ensure their rules reflect the New Jersey laws. The Division of Gaming Enforcement may do more of the same, but the prosecution of offshore sites does not seem to be a likely move.

Players on regulated sites have nothing to worry about, nor do players on sites that are licensed outside of the United States. No matter what the New Jersey regulator may do, it is not likely to include any targeting of players themselves.

Sites in New Jersey are tightly regulated and monitored to ensure player funds are safe and segregated from other operating funds. This ensures that players will be paid in any event.

Each site offers various methods for players to deposit and withdraw funds to and from their online gaming accounts. Customers can choose from the most convenient method or contact the customer service department to find out what options will work best.

Are there any land-based casinos in the state of New Jersey?

Yes. New Jersey has a total of 23 casinos spread out across 12 cities. Atlantic City is home to most in the state with a total of 10 casinos on on and around the famous Boardwalk.