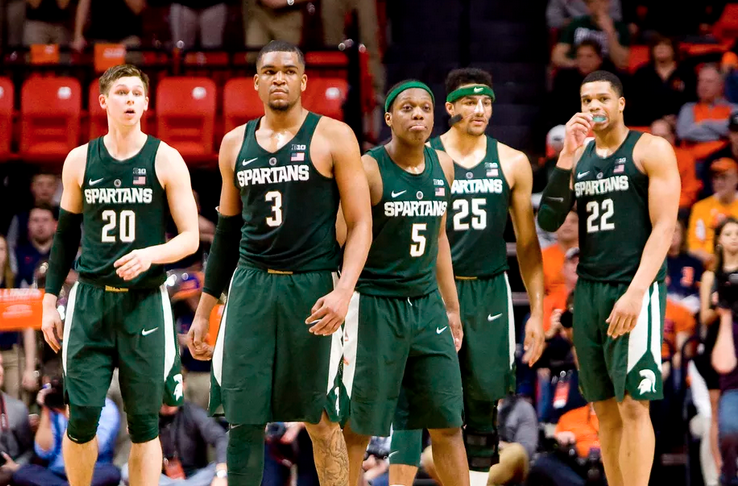 The East Region Final will feature a pair of blue blood college basketball programs and the top two seeds in that region. The Duke Blue Devils are the top overall seed in this year’s NCAA Tournament, but they will have their hands full with 2-seeded Michigan State in this game. These two teams met in the Final Four in 2015, and they are no stranger to playing each other in the NCAA Tournament. This game will pit a veteran Michigan State Team against a young, but extremely talented Duke team.

Michigan State got off to a slow start in the NCAA Tournament but rallied to get past 15-seeded Bradley in the first round. The Spartans have been rolling ever since with blowout wins over Minnesota and LSU. Head coach Tom Izzo always seems to have his teams playing great in March, and this is an extremely talented Spartans team. Duke has not been playing their best in the NCAA Tournament, and they have won their past two games by a combined three points. The Blue Devils have survived and advanced, but they will need to play better to beat the Spartans. Duke is a -1.5 point favorite in this game against Michigan State.

Duke is Relying on Freshmen

Zion Williamson gets a ton of the headlines for Duke, but they have some other freshmen that can play as well. Williamson is averaging 22.6 points and 8.9 rebounds this season and is good for a few high-flying dunks each game. RJ Barrett has turned into a terrific playmaker for Duke this season, leading the team with 22.7 points per game, and had 11 assists in the Sweet Sixteen win. Point guard Tre Jones stepped up in a big way in the win over Virginia Tech, making five three-pointers and having a career-high 22 points. Duke was without freshman Cam Reddish in the Sweet 16, and his status for this game is unknown.

The Blue Devils are averaging more than 83.1 points per game this season, but they do most of their scoring in the paint. Duke is shooting just 30 percent from the three-point line as a team, and they are missing their best shooter in Reddish. Michigan State is going to force Duke to make shots from the perimeter, and they have plenty of size to protect the rim.

Michigan State is a team that is led by a solid group of veterans, most notably point guard Cassius Winston. Winston is one of the best players in college basketball this season and leads the Spartans with 18.9 points and 7.6 assists per game. The Spartans won’t mind playing fast with Duke, but they can also lock in on the defensive end as well. Michigan State is allowing just over 64 points per game, and they just don’t give up points easily.

Even though veterans lead the way for Michigan State, a pair of freshmen were the stars in the Sweet 16. Aaron Henry and Gabe Brown combined for 35 points in the win over LSU, and both of them were hitting shots all night long. With forward Nick Ward potentially out with a hand injury, Tom Izzo will be looking for another great night from his two freshmen stars.

Michigan State Moves on to Minneapolis

Duke has not looked anything like a number one seed in their last two wins, and some would say that they are lucky to be in the Elite Eight. That luck is going to run out on Sunday night against a Michigan State team that is playing well. The Blue Devils just don’t shoot the ball well from deep, and the Spartans will take away the paint. Look for Cassius Winston to lead his team to the Final Four in Minneapolis. Bet the Michigan State Spartans +1.5 over the Duke Blue Devils.