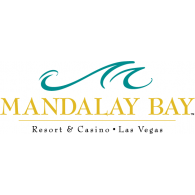 Situated at the south end of the Strip, the shining gold towers of Mandalay Bay Resort ate one of the first sights a visitor sees when leaving the airport. The luxury resort has been wowing guest and visitors for two decades now, and even when facing a tragedy, the resort come through with class and continues to be a capital of entertainment in the city.

The Mandalay Bay Resort and Casino opened its doors in 1999, after a struggle with the construction that threatened to derail the entire project.  The fanfare around the resort was well-deserved – it was a true marvel on all fronts.  The Four Seasons operates on four floors of the main Mandalay Tower, and a second tower was built featuring only suites.  Today, there are well over 3,000 rooms available at the resort, and its location at the end of the Strip means that there aren’t as many passers-by as some of the more central casinos.  Mandalay Bay was sold to MGM Resorts in 2005, and then in 2020, the company sold it to MGM Growth and Blackstone, retaining a lease on operating the resort.

Of course, many people associate Mandalay Bay with the horrible mass shooting that occurred on October 1, 2017.  While this could have crippled the resort, it fought back fiercely, and the support showed by the MGM family, Las Vegas community, and travelers around the world have kept the resort in good standing despite the tragedy.

One appealing quality of Mandalay Bay is that without the same amount of foot traffic of tourists wandering through the property as locations like Bellagio, the expansive gaming floor does not seem crowded at all.  Built with that comfort in mind, the casino floor is a sprawling 135,000 square feet, giving players a workout along with their gaming entertainment.  There are multiple table games pits, featuring a total of 132 tables, including a VIP room for those wanting a little more privacy.  There are also 2,200 slot machines on the property, which is not a lot compared to many of the other casinos, which again provides a little more comfortable space between gamblers.  Don’t worry, there are still all the titles that everyone has come to love in the slots world, including many of the networked progressive games that regularly payout eight-figure sums!

Seeing that one full town of the resort features suites, you will find the majority of the rooms at Mandalay Bay Resort providing luxury.  Here are a few rooms with a little something extra for the travelers that want to splurge.

At the top of the list (and the top of the hotel) is this incredible 5,700 square foot suite that is larger than most peoples’ homes!  The four bedrooms are all spectacularly designed, each of them coming with their own living area and bathroom.   The two-floor suite has huge windows facing out to the Strip, giving guests some of the best views in all of Las Vegas.  This room is not easy to come by, so if you are feeling like spending the cash, you have to call the resort to discuss it with them.

While not as opulent as the Presidential Suite, this room will take your breath away as well.  The three bedrooms in this suite are all designed with classic tones, and the living area of this 3,800 square foot room is where the real luxury sits.  A full wet bar and great lounge area give you views of the Strip, and if you are interested, you are invited to visit the exclusive Foundation Room as part of your stay in this suite.

At 2,700 Square feet, the Coral suite still feels like a room in which you can entertain many friends.  The room is decked out in a more modern tropical look and feel and is meant to give you more of a feeling like home. Wit a living room, dining room, and study area, the coziness of this room is felt the second you open the door.

Mandalay Bay has always been know for its exceptional cuisine, and while some of the spots have changed over the years, here are three fantastic options for meals on the property.

This one is for the wine lovers – the thousands of wines on location at this Charlie Palmer restaurant are enough to make you forget that you are there to eat dinner!  The food pairings with the wine are delicious, and while this meal may set you back a few hundred dollars, the experience is one that will stick with you for a lifetime.

Chef Michael Mina’s first foray into the steakhouse game is a smashing success.  This is the place to go for some of the best steak in all the United States, including the ultra-rare A5 Japanese Kobe steak that will make you think you have died and gone to heaven.  Stripsteak is a classic steakhouse with huge side dishes available to complement the incredible cuts of meat.

This traditional French bistro is brought to life by the famous Chef Hubert Keller.  The French-inspired cuisine is something to behold, both from a taste and viewing perspective.  With a seasonal menu, you will always find something new on the menu alongside the French classics like Coq-Au-Vin and Duck Confit.

The One Thing You Can’t Miss at Mandalay Bay Resort

Without question, the water-themed parts of Mandalay Bay are not to be missed.  First off, this is one of the only properties in Las Vegas with a real beach.  The Mandalay Bay Beach is an oasis in the desert, giving you the chance to act as though you are in a Caribbean resort. Check out the lazy river or the wave pool, or simply grab a cabana to help rest after a long night at the tables and clubs.  Either way, the brach is always a good stop.

Following on the water theme, the Shark Reef Aquarium is a spectacular look into underwater life.  Check out the shark feedings, as well as your chance to pet a stingray. The top attraction here, however, is the moving sidewalk in the sea tunnel, where you can see all the underwater creatures all around you – look out for the sharks above your head!