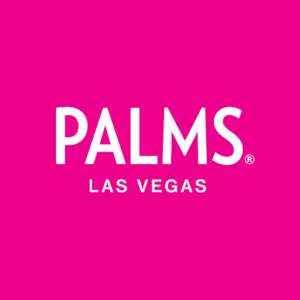 Established In: 2001 (extension added in 2005)
Former Names: None
Owner: Station Casinos
Number of Rooms: 703
Location: Flamingo Road, across from the Rio and the Gold Coast

The Palms Casino Resort has been around for a short time compared to some of the resorts on the Las Vegas Strip, but that doesn’t mean it has a lack of history. When the Maloof family opened the resort in November 2001, it already had a reputation as the place where celebrities would come to stay and party.

A star-studded launch was overshadowed by the effect that the events of September 11th had on the city, so it was a rough go to start for the resort. However, the Palms name became known across the country in 2002 when the MTV reality show The Real World was filmed in one of its luxury suites. From then on, anyone wanting to be seen had to grace the halls of the Palms, the Real World Suite, and the nightclubs and pool parties that became famous across the city.

As with every casino in Vegas, the Palms found itself struggling over the years, but a second tower filled with fantasy suites definitely kept things interesting in the mid-2000s. However, by 2010, the Maloofs seemed far more interested in their NBA team (they own the Sacramento Kings) than the casino. The resort was nearing bankruptcy and finally exchanged ownership in the property in return for reducing the 400 million debt it had accumulated.

In May 2016, Station Casinos agreed to buy the Palms for $313 Million, and a $600 Million renovation has taken place since then. Still known more as a casino for locals, the Palms still offers some amazing amenities for guests from far and wide.

Despite only having 700 rooms, the Palms Casino floor is sprawling at 95,000 square feet. The layout is a little different than many of the larger resorts on the strip – the casino has more of an elongated shape to it, with the restaurants and other amenities surrounding it and the main casino lounge right in the middle of the action.

There are a sneaky number of table games – 90 – and over 1,500 slot machines for you to sit down and enjoy a spin or two. With no online gambling site owned by Station Casinos, you aren’t able to play real money games with the Palms in your room, but one day soon, that may be a reality. The limits at the gaming tables at the Palms vary greatly during the day, so you want to try to get there as the minimums are about to rise so you can be grandfathered into the lower number. The casino has some excellent modern music playing through it to create more of a party ambiance.

There is a full poker room at the Palms featuring ten tables, and more can be added when the resort hosts a tournament. There is also a generously sized sportsbook at the resort for those looking to cash in on their favorite teams or athletes.

One of the things the Palms became known for early on was a high level of decadence, and this can be found in the number of High Roller Fantasy Suites on the property. We are only going to focus on three of them in particular, although there are many more to choose from, including staying in the Real World Suite.

Known as the most expensive hotel room in Las Vegas, this suite has been redesigned in recent years and now comes in at a weighty $100,000 per night. While you aren’t likely to be given a chance to reserve this room anytime soon, you may find yourself invited up to the suite, where you will find 9,000 square feet of pure opulence, highlighted by a pool…on the side of the building hundreds of feet in the air.

Las Vegas isn’t always about gambling, and sometimes it is nice to take a break from the tables and enjoy other activities. How about bowling, for example…in your room! The Kingpin Suite is one of the more popular Fantasy Suites at the hotel, featuring two full-size bowling lanes and a full bar setup.

Want to feel like a real “baller”? Then you should stay at this suite, which is an actual basketball court, including a full locker room facility. Murphy beds come out of the walls so you can literally eat, drink, and sleep basketball.

The Palms has always had great food options across many palates, and the remodel that took place in 2018 brought with it some great dining options.

It starts with one of the best steakhouses in all of Las Vegas, Scotch 80. This classic looking steakhouse with a modern twist also features a massive collection of whiskey, including some of the rarest bottles on the planet.

If you are looking for some excellent dim sum, then the Palms has you covered with Tim Ho Wan. There is always a decent wait for this place, but the food inside is definitely worth it. Anytime day or night, you can get some of Hong Kong’s finest in this establishment.

While it is a more casual vibe, BBQ lovers are going to love what Chef Michael Simon is bringing to the Palms at Mabel’s BBQ. You had better come hungry for this simple a-la-carte offering that is bursting at the seams with flavor.

The One Thing You Can’t Miss at Palms Casino Resort

The pool area at the Palms is legendary and has hosted some of the busiest pool parties in the city since the resort opened 20 years ago. The recent remodel of the resort included the pool, and now it is an adult playground featuring two bars, great music, and some suites that open right into the seating area. This is a can’t miss spot for people watching and just to take a break from all the action inside the resort.