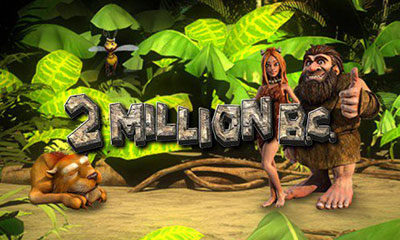 2 Million BC is a slot game developed by Betsoft that’s going to take you back to caveman times. However, we mean this in the sense of the characters themselves because this is a modern slot game with amazing graphics and one that just screams out fun.

Overview of 2 Million BC

This game is going to offer you 5 reels and a total of 30 different paylines, so it offers an ample opportunity to grab a win or two. Also, the reels are set against a forest background with the different buttons taking on the appearance of stone, so that all fits in perfectly well with the overall theme. The symbols that appear on the reels are also in line with the theme with various stone implements, the saber tooth tiger, and you can expect the caveman himself to make an appearance from time to time as well.

How to Play 2 Million BC

To play, you need to begin by selecting the size of coin you want to bet with and that can be changed by altering the value via the plus or minus signs. Once you are happy, you can then select the number of lines by doing the same thing. At this point, you can then hit spin and see what happens.

Bonus Features for 2 Million BC

The game does have several bonus features to keep you entertained. Perhaps the best bonus feature surrounds the appearance of at least 3 diamonds on the reels. When you land this, you are then taken to a special game on a second screen. Here, you control the caveman by selecting different scenarios as he attempts to steal a diamond from the saber tooth tiger. The better you do, then the higher the reward you receive.

With this game, the campfire acts as the scatter, and if you land at least 3 of them then it means you grab some free spins. However, land the scatters again during the free spins and you will re-trigger the entire bonus.

Also, keep an eye out for acorns because when one falls it’s taken away by a bee and placed on top of the reels. Get 3 of them and you open up the saber attack game. Here, you are the caveman and need to knock the tiger out. Manage to do that, and you will win some instant credits.

Betting and Payouts for 2 Million BC

In this game, the coin denominations range from $0.02 up to $1. What this means is that you can place a maximum bet of $150 per spin if you place the maximum bet across each line and every reel. When it comes to the payouts, then the maximum is $2500, but you need to have the highest bet and land 5 cavewomen symbols to activate this.

2 Million BC is a fun slot with a slightly different theme to the norm, and that is certainly something that makes the game stand out from the crowd. The gameplay is cool, the bonus games are out of this world, and this has to be one of the best games that Betsoft has ever produced.