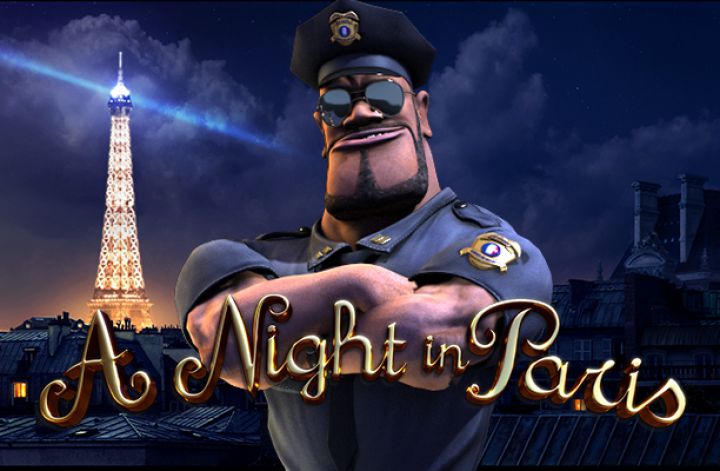 A Night in Paris is a slot game by Betsoft that’s inspired by French movies. While being in Paris itself is not a unique slot theme, it’s always interesting to see what take they have on this angle in order to make their slot stand out from the others. So, what have they done, and have they achieved that?

Introduction to A Night in Paris

The game contains 5 reels and a total of 30 different paylines which is slightly above the average for most slots. The reels themselves are set against Paris but the theme is actually of a burglar matching up against the security guard who wants to stop the theft. There’s also some French music in the background to add to the overall feeling while the symbols used include not only the thief, the guard, and his dog, but also lovers at a cafe, vases, doves, and other more romantic symbols representative of Paris.

How to Play A Night in Paris

To play, you need to start things off by selecting the coin size, and this is achieved by clicking through the options at the coin size button. Then, you need to select the number of lines, and this is changed via the plus and minus symbols next to that button. As you do this, the value changes of the total bet, so keep an eye on that to avoid being hit with a bigger bet than you intended.

Bonus Features for A Night in Paris

There are different bonus features available on the reels, and the first one is when you land 3 security guard badges. When you do this, you win some free spins with a minimum of 5 for 3 symbols and the number increasing for 4 or 5. With this bonus, there’s some cool animation of the thief being chased by the guard across the screen.

Another bonus feature is the instant rewards feature. You get this when you get certain combinations on the screen. Look out for the security guard, the badge and the thief, or, alternatively, the thief, the badge, and the guard. To get instant rewards, they must appear in either of those orders.

Also, land three paintings on the reels and you trigger another bonus feature. With this, you need to guess what the thief is going to steal in order to win some prizes.

Betting and Payouts for A Night in Paris

The coin range with this game varies from $0.02 to $1. Also, the maximum bet for the slot is set at $75, but then there are the payouts to think about as well. Land 5 security guard symbols and the maximum payout is set at 150 coins, which is pretty low compared to other slots. Of course, as you slide down the symbols, the payouts become less so you need to weigh this up when placing your initial bet.

A Night in Paris is a slick game with amazing graphics, but sadly the payouts do let the game down to a certain extent. However, if you don’t plan on betting huge amounts at one time, then this game may be entertaining to you while still giving you some chance of grabbing some winning paylines.