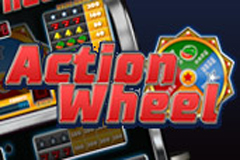 Action Wheel is perhaps best described as a cool retro slot game developed by the team at Betsoft. Of course, when you think of a retro approach it often makes you feel that this game will be lacking in additional features, but will that be the case?

The first thing to mention is that this game contains 3 reels and only 5 paylines. However, that is at least in keeping with the retro idea. The reels also pretty much cover the entire screen since they are going for that old-school approach rather than the more slick video slots that are now so commonplace. Of course, this also means the symbols used need to tie in with the retro approach, and that means bells, oranges, lemons, grapes, and others that will be very familiar to anybody that has played a more traditional slot game at any point.

How to Play Action Wheel

Playing the game is where Action Wheel throws up a different option in that you are able to select from four different bet levels. These bet levels change from 5 to 10, 20, and 40. Select the coin size by moving between the options while then choosing the bet level before hitting the spin button. Do keep an eye out for the bet size to make sure you aren’t spending more than you intended.

Here is where there tends to be a bit of an issue with the game in that bonus features don’t really exist. There is no wild symbol, no scatter symbol, no multipliers, and no free spins. The game is as basic as it can get, but we don’t believe that you should then allow this lack of bonus features to get you down. Instead, it’s all part of the fun of the game in that it’s really down to that single spin of the reels.

Betting and Payouts for Action Wheel

The minimum bet available is set at 0.1 while the maximum is 1, and this means that the minimum bet is slightly higher than you may be used to elsewhere. Also, as there are only 3 reels, it will mean that there are times where you will win a small payout for landing two of the same symbol along with any other fruit. However, don’t expect those payouts to change your life as that won’t be the case.

One cool thing about this game is that they do clearly display the payouts depending on the fruits you land, so there will be no confusion at any point. Do just remember that with no multipliers that what you see is indeed what you will get.

Overall, Action Wheel is what you kind of expect from a retro slot game. The bonus features don’t exist, the symbols are along familiar retro lines, and the gameplay is simple and basic. Yes, the payouts may also below, but the game is fast-paced and is still full of fun even if it doesn’t hit the payout heights that you may be used to elsewhere.