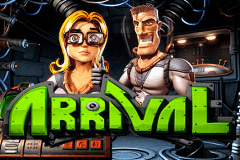 Arrival is a science-fiction, space-based slot game developed by Betsoft. Of course, you have probably encountered slots along with this kind of line before, but with Betsoft you can usually rely on cool graphics and nice additional features. So, is that still the case with this slot?

The game has 5 reels and provides you with a total of 30 different paylines. The core of the theme is focused on two young space marines mixed in with spaceships, asteroids, and anything else you would expect to find in space. As a result, the symbols are also along similar lines with planets, the marines, space badges, and spaceships being predominant across the reels.

How to Play Arrival

Playing the game is very easy and involves carrying out a few simple steps before hitting spin. First, choose your coin size. Next, select the bet per line by hitting the plus and minus symbols. Finally, change the number of paylines by also hitting the relevant plus and minus buttons. After this, you will then see how much your total bet is going to be before hitting spin. Also, there’s an auto spin feature if you want to speed things up.

This game is slightly different in that it features two different scatter symbols. The first symbol is the laser gun and if you land at least 3 of them across the reels then it triggers the special UFO click-me game. With this, laser guns appear and you need to click on them to grab some instant wins.

Another scatter symbol is the alien and landing this kicks in the expanding wild symbol. This is going to appear on reels 1, 3, or 5 and then triggers in a spaceship which becomes the sticky wild. Your chances of landing some wins then increase as a result.

Finally, there’s the girl symbol as another bonus. Here, you need to follow the girl into the alien spaceship to rescue the girl. This provides instant wins as well as offering some seriously cool animation.

Betting and Payouts for Arrival

The coin range with this game varies from 0.02 to 1. Also, the maximum number of coins that can be placed per line is set at 5 while the overall total maximum bet is $75. If you are looking for the jackpot, then this is set at $5000 if you are playing with the maximum bet of $75 at the time. While this may sound low compared to other games, it still represents a real return for a relatively low bet.

Overall, Arrival is a pretty decent slot game developed by Betsoft. The graphics are what you would expect from them while the game itself runs smoothly enough. The various bonus features are a bit different from the norm, and this is certainly a good thing considering they have included two scatters as opposed to too many wilds. Also, there’s a chance to play a low bet compared to other games out there, so if you just want to test the water, then this could be the perfect option.