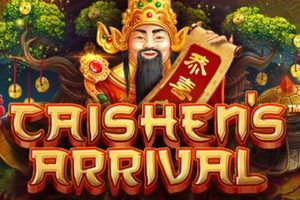 Caishen’s Arrival is a 3D slot game inspired by the Chinese God of Wealth, Cashien. The red and gold visuals suit the far Eastern style of this engaging game from Betsoft.

The graphics in Caishen’s Arrival are fairly basic and some traditional slot symbols of letters and numbers appear on the reels. These are combined with Chinese themed symbols of turtles, gold coins and money trees, and even Cashien himself! The gameplay is easy to follow and the use of simple buttons makes for a quick and interchangeable experience for players.

How to Play Caishen’s Arrival

The gameplay in Caishen’s Arrival is easy to follow and just a few simple buttons help players to increase or decrease bets before each spin.

Once the betting settings have been placed, players can spin. As soon as winnings have been paid out, the Double Up button will become available, allowing players to bet half or all of their winnings on a chance of heads or tails.

A player’s winnings and the balance of their remaining credits are clearly displayed on the screens below the game and are updated immediately after each spin.

The wild symbol is Cashien himself and appears on reels 2,3 and 4. When the wild appears on one of the center reels, a free re-spin is given and the symbol covers the entire reel for the player’s re-spin.

Betting and Payout for Caishen’s Arrival

Wagers start at 0.05 and the maximum bet that can be placed is 5.00. Auto-play settings can also be set by users if they wish to place consistent bets of the same amount each time. This also applies to the number of spins, which start at five and finish at 100.

Caishen’s Arrival is compatible across desktop, iOS, Android, and tablet devices. Betsoft estimates the gameplay speed to be quicker on desktop (loading at approx. 18 seconds) while mobile load speed is higher – approx. 26 seconds.

The additional bonuses and ability to raise higher stakes in Caishen’s Arrival mean large pay-outs are available to players. However, a return to player rate of 95.74% lessens the chances of winning large returns from Caishen’s Arrival.