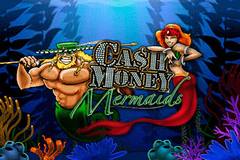 Cash Money Mermaids provides an entertaining 3D slot experience with unique sound effects and bright background themes. The host of whacky characters at the bottom of the ocean, who represent something in between a mythical adventure and a fancy-dress party, complete the game nicely.

With 25 paylines and five reels, Cash Money Mermaids is one of Betsoft’s more advanced slot games. There are plenty of bonus symbols, scatters and additional features to commit players to build their winning pot – a good distraction from the bubbles rising up the screen or from the outrageous in-game characters.

More traditional slot symbols of letters and numbers are combined with aquatic-themed symbols, such as King Neptune, who occasionally appears donning a feather hat and a fur coat. Other underwater creatures in the game include booze wielding octopus and a pair of friendly sea-horses, which adds to the fun element of Cash Money Mermaids.

How to Play Cash Money Mermaids

The gameplay in Cash Money Mermaids is very straight forward. Buttons below the screen clearly guide players through placing their stake and the simple spin and stop controls make starting the game a breeze.

Players can use the up and down toggles on either side of the Value and Lines buttons to determine how much to bet and how many paylines to include per spin. Betting amounts range from 0.01 to 5.00 credits so there’s a large choice on how much users wish to stake. The 25 paylines can also be set and physical lines appear on the screen before spinning to show players how winning combinations will be calculated.

Two Info buttons have placed on either side of the screen to show players the rules of the game and the value of the wilds and scatter. Auto-play controls also allow players to set a recurring amount of credits and paylines to prevent re-setting bets before each spin.

Cash Money Mermaids has a range of bonuses. A fist displaying a ginormous, gold ring is the wild in this game. When this wild appears, it can be substituted for any other symbols on the reels to form a higher winning combination.

A Cash Money symbol is the scatter. When three or more of these symbols are on the reels, the player will automatically receive five free spins.

Although he looks slightly menacing at first, it’s a good sign when King Neptune appears in his bold attire. ‘King Tune’, as his symbol says in the game, will sometimes feature on one of the reels after a free spin. His arrival automatically creates better combinations on the reels and increases a player’s winning pot.

Cash Money Mermaids is available to play via a number of online providers. The game is compatible with desktop devices and can also be played on IoS, Android, and tablets.

While there are some good bonus features in Cash Money Mermaids, there are no multipliers in play which makes the return to the player fairly low at 95%. Therefore, it is more difficult to build a pot quickly, and winning big is time-consuming or requires large, continuous bets to be made.