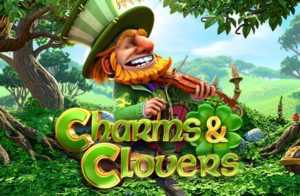 “The Luck of the Irish” has inspired Betsoft’s Charms and Clovers slot game. Green, brown and gold colors burst off the screen, and a cheeky leprechaun smiles from the corner of the rustic countryside-woodland scene behind the reels.

The gameplay is almost as unique as the setting in Charms and Clovers, as symbols are distributed across six reels while up to 40 pay lines are available. The unique sixth reel acts as purely a bonus section with wild and scatters symbols only appearing here. Progressive bonus rounds and free spin features also increase a player’s chances of winning big on this game.

How to Play Charms and Clovers

Players can set their minimum credit and bets per line by using the increase and decrease buttons below the screen before spinning. The minimum bet is 0.01 credits on one line and the maximum is 1.00 across five lines.

When a player has set their betting preferences, they can spin. Any winning combinations will expand from the screen and light up. Payouts are then shown immediately in the digital Winnings box underneath the screen. Players can then choose to gamble half or all of their winnings using the Double Up function or spin again.

Autoplay options allow players to set recurring wagers and paylines based on their preferences.

The instructions page, opened by pressing the question mark icon in the bottom right of the screen, offers concise explanations of the bonuses and features for the player. Easy to manage settings can also be switched on and off for those wanting fewer special effects and quicker spins.

Bonus Features for Charms and Clovers

There are four bonus features in Charms and Clovers. When the Money Wheel symbol appears, separate mini-game launches, and players have the chance to win up to 3x, 5x, or 15x their original stake. A spin of the Super Wheel is also provided, which can lead to 40x a player’s original stake if they win.

The mega symbol, a giant 3×3 leprechaun, may appear on the sixth reel and this immediately provides eight free spins. This giant symbol is then added to the reels and can combine with other smaller leprechaun symbols in regular play, which leads to larger winning combinations.

Pots o’ Gold wild symbols also provide players with eight free spins; this is also triggered when it appears on the sixth reel. 1 to 3 additional wilds are also added to the five regular reels through the Pots o’ Gold bonus to increase the chances of further free spins.

The final bonus symbol is a rainbow entering a pot of gold, known as the Golden Bonus. When this symbol appears, players can choose five pots of gold on the screen which reveal different prizes, the biggest of which can provide a 20x increase on a player’s initial bet.

Compatibility of Charms and Clovers

Charms and Clovers is support on both desktop and mobile (iOS and Android). Betsoft estimates the game to run slightly quicker on desktop (27 seconds @ 5mbps) than mobile (29 seconds on 3G speeds). Graphics can be turned on and off to increase or decrease the load time of the game.

The RTP of Charms and Clovers is 96.31%. This is largely due to the expansive sixth bonus wheel, which offers plenty of scopes for players to multiply their winnings quickly from smaller bets.