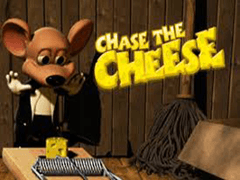 Chase the Cheese is a quick-paced 3D slot game from Betsoft which follows the adventure of a mouse trying to captures a slice of cheese.

Overview of Chase the Cheese

With a simple design and layout, Chase the Cheese places more emphasis on placing bets rather than on eye-catching special effects and visuals. The gameplay is straight-forward and the four by four-reel and nine paylines reflect the simplicity of the game.

Chase the Cheese has some similarities to older fruit machine games. Symbols of traditional cherries, numbers, and jackpot symbols are mixed with the mice themed icons of cheese and mousetraps to provide a little element of entertainment to the gameplay.

How to Play Chase the Cheese

The basic gameplay is at the forefront of Chase the Cheese. Faster and more frequent betting is encouraged through the quick-paced rhythm of the game.

Users can place their stake and the number of paylines by using the Select Lines and Bet per Line buttons underneath the screen. The maximum bet in this game is 1.00 credits while the minimum is 0.02. Once a player has selected the amount to wager, the large Spin button begins turning the reels. The Max bet control allows users to place the highest possible amount of credits before playing.

After the reels lock in place, any winning combinations will be highlighted on the reel through flashing lights. Players can easily keep track of their winnings, remaining credits, and the amount they have won through the digital counter in the left-hand corner of the screen. Progressive earnings are clearly highlighted in the top left corner of the screen too.

Bonus Features for Chase the Cheese

Although it’s not being jam-packed with bonuses and special features, Chase the Cheese includes wilds and an interesting progressive bonus round, which gives players plenty of chances to bolster their winning pot.

The separate bonus round is the main attraction of the game. When four Chase the Cheese scatter symbols appear on the reels, the bonus game will launch. Players can then control a virtual mouse to catch pieces of cheese as they navigate a simple map. Each piece of cheese is worth one credit each and the key to succeeding in the game is avoiding villainous characters, such as cats, birds, spiders, and bats, who will eat the mouse. Players can progress to extra levels by reaching the mouse-hole at the end of the map.

The wild symbols help players to increase their payouts by replacing symbols with a lower value. This symbol simply says ‘Wild’ in bold, colorful letters so cannot be overlooked when it appears on the reel.

Compatibility of Chase the Cheese

Chase the Cheese is available to play online on desktop and on mobile devices (android, iOS, and tablet.) The game speed is quicker compared to similar games as there are fewer graphics and special effects.

Although the bonus round is a huge feature in Chase the Cheese, actually launching the game is difficult due to the irregularity of the scatter symbols showing on the reels. As a result, the potential earnings for players can be quite low and the 94% return to player rate reflects how players may need to place large wagers initially to earn decent returns.