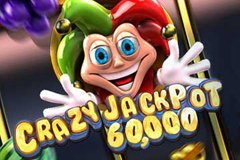 The illuminating lights and layout of Crazy Jackpot 60,000 immediately represent the real-life slot machines of Las Vegas. Betsoft has kept many of the traditional slot features in this game: classic symbols, flashing lights around the screen, and three main reels. But the additional bonus reels provide chances to win through multipliers and this cleverly enhances the playing experience and excitement.

There is little in the way of the theme in Crazy Jackpot 60,000. The sheer size of the reels, which dominate most of the screen, means that gameplay is the focal point here as there are very few eye-catching effects. The speed of the game reflects this too as quick spins and rapidly revolving reels allow bets to be placed frequently.

Gameplay in Crazy Jackpot 60,000 closely follows the traditional fruit machine style. Players decide their betting amount first, which varies between the minimum of 0.02 and 1.00 credits. Paylines of either three, nine, or 27 can then be chosen – to view the paylines in operation, players can click the View Pays button towards the top-right corner of the screen to see which lines are in operation before spinning.

Players then spin the reels and winnings will automatically be highlighted on screen and paid into the balance. Any winnings are clearly shown next to the digital Win icon underneath the screen.

Auto-play settings can also be set before starting the game if players do not want to keep altering their betting amounts before each spin.

The additional bonus reels, known as the Crazy Wheel, provide the bonuses in Crazy Jackpot 60,000. These are the two smaller reels directly to the right of the 3×3 main reel.

The Crazy Wheel comes into play as soon as any winning combinations show on the main wheel. Straight away, the smaller fourth reel automatically starts spinning and either: lands on an empty slot where no additional multipliers are applied, or lands on an x2, x3, or x5 symbol which immediately multiplies a player’s original winnings.

But that’s not all! If the fourth reel lands on a multiplier, the fifth wheel follows in the chain reaction and can add further multipliers up to 10x to a player’s winnings.

A Joker Wild is also in operation on all five reels. On the main reel, the Joker replaces any lower scoring combinations and increases the subsequent payout. If the Joker appears on the first bonus reel, it increases a multipliers value by 10 (i.e. 2x would lead to a 12x payout, etc.). But, when it appears on the final bonus reel, the Joker’s presence can lead to a 20x increase in the player’s original winnings.

Crazy Jackpot 60,000 is available to play online through a range of providers and is compatible with both desktop and mobile devices (iOS, Android, and tablet.) The game speed is very quick and centered around faster betting due to the lack of advanced graphics.

Despite the nostalgic feel and straight forward gameplay of Crazy Jackpot 60,000, there are many elements of this game that elevate it from a simple slot game. The additional bonus reels look almost out of place initially, but when an initial combination shows on the main reels, you know it could just be the start of a big winning spin!