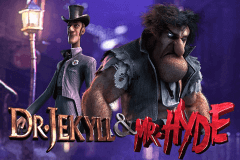 Created by those guys at Betsoft, Dr. Jekyll and Mr. Hyde is a horror-themed slot game that entices you with a few surprises along the way. Offering big graphics, a cool theme, and some additional features, getting to grips with what this game can offer you is certainly advisable before playing.

This game contains 5 reels and a total of 30 different paylines offering you ample opportunity to strike it lucky. The game contains all manner of bonus features, while the theme is also very visual in its approach. Also, look out for the various symbols as they are different from the norm. In this instance, they include visuals of the two main characters, the game logo, police, potions, keys, and a whole lot more. However, they do all fit into the theme adding to the thrill of the entire game.

Select your coins. Select the number of paylines, and then hit spin. Also, there’s an auto spin option if you want to keep things going without changing your bet. The interface is along similar lines to other Betsoft games, so it should all be pretty familiar if you have played their games before.

The bonus features are where this game tends to surpass so many others. First, the Jekyll and Hyde logo acts as the wild. Land one with the two highest paying symbols and you could be in for one of the big prizes. Also, if you get Jekyll on the third reel and the red potion on either 2 or 4, then each Jekyll and Hyde symbol becomes wild and you could win up to 10x your stake. The same kind of thing also applies if you get Hyde and the blue potion, but this time the bonus can vary between 5x and 20x your stake.

If you land a red potion on its own, then you see it being added to your free spin collection. Add 12 blue potions on their own and you will get up to 10 free spins where there’s a real chance of winning prizes that are multiple times your stake.

Then you have a frenzy bonus where you become Mr. Hyde and steal candy. This happens when Hyde appears on reels 2 or 4 and the game logo is on reel 3. With this, you could win up to 30x your stake.

Finally, get Jekyll on reels 2 or 4 and the game logo on reel 3 and you pick potions that create a monster serum. Here, you could win up to 120x your stake while the average appears to be around 50x.

The coin range here is anywhere between 0.02 and 1. The cash version allows you to bet anywhere from $0.60 to $150 per spin, so there’s the option for low bets here as well. The jackpot isn’t progressive, and it is set at 24,000 coins which is still quite impressive for such a low betting range.

Overall, this game by Betsoft is ideal for people that love a good bonus feature. In fact, some could argue that it contains too many bonus features, but with an RTP of 96%, there’s a good chance of you having a winning run with this game.