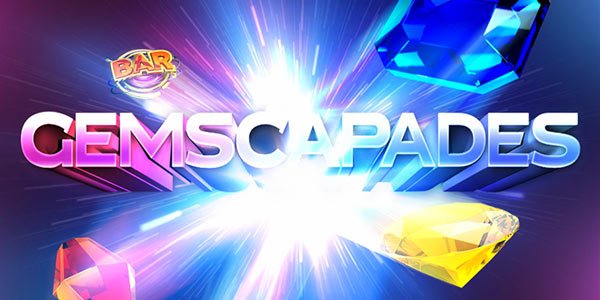 Gemscapades is a slot game from Betsoft that comes with ten configured pay lines and five reels grid. This gem-themed game is ideal for all slot enthusiasts whether they are low or high rollers. Although Gemscapades is an old-school game it has several modern twists. For example, the winning combination comes in when symbols align left to right and right to left, increasing players’ winning chances.

However, the game is standard regarding what’s its offering. Several things that would make this game outstand, such as scatter, free rounds, and other features, are missing. Ideally, it has characteristics almost similar to those you find on Starburst, only fewer but appealing. Here is more.

Gemscapades offers a wide betting range. A player can adjust bets from 0.20 to 1.00 as the value of each coin. Also, you can bet with one up to ten coins per pay line. So if you’re betting the maximum, you can wager 100 credits per spin.

Once you click spin, more than eight symbols will start appearing on the reels. These include the 7, red ruby, golden diamond, blue crystal, pink gemstone, BAR logo, and an emerald green gem. Whenever a gem lands on the reel, you’ll hear a clinking sound while shooting a comet graphic that will appear announcing your wins. The symbols will continue to loom out until you click the spin button again.

If you see five BAR icons on reels, you’re rewarded with 2,500 coins. Four BAR logos give you 2000 coins, and three logos reward you with 500 coins. The other high paying symbol is 7, which provides you with 1200 coins when you get five aligned, 600 coins if four align, or 250 coins when three align.

The golden gem rewards players with 600 coins when they align five of them, 250 for four, and 100 coins for three golden gems. The green gem follows suit with 500 coins for five and 80 for three. You get payouts whether the symbols align from the leftmost side or the right. If you play the maximum bet, the game triggers a jackpot where you can win up to 250x your bet amount.

Unfortunately, Gemscapades doesn’t offer bonus rounds or reels. The only thing close is the wild symbol that appears once every five spins. The good thing is that you know the wild must pop up every five spins, but there’s nothing attractive. When it appears, it spread over all the reels and trigger a re-spin. This is not much considering the win it gives you is almost similar to the one you get when you match three symbols.

The wild symbol, gem flower, appears on the middle three reels. It triggers a free spin, which retriggers if a wild symbol appears on another reel.

The Gemscapades slot game runs over the FLASH technology. This means you don’t have to download the game to your phone or computer. Moreover, even Mac users can play the game. It also means the game loads in seconds. Gemscapades is playable on iPhone, Android, Mac, iPad, desktop, and Windows laptops. With internet-enabled devices, you can play Gemscapades from whichever device you have. The slot is available for free play and real money and is accessible on casinos supported by Betsoft.