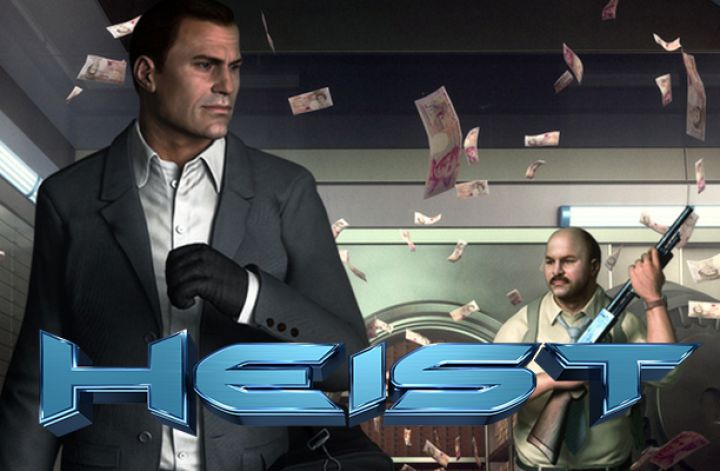 Heist is perhaps best described as being an immersive video slot that draws you into a slightly different theme than the norm. Created by the clever people at Betsoft, this game is dark and moody in its appearance, but that doesn’t mean the game itself or your experience has to follow along those lines.

The game itself offers you 5 reels and brings 30 different paylines to the table. The theme is based on a mastermind criminal who is facing the biggest payday of his life in a bank heist. However, on the other side is the police office, close to catching him, with the slot effectively taking on both sides of the story. The reels are set against a bank vault while the symbols also closely reflect the theme. This means vault plans, money, the robber and the detective, tools, a clock, and the vault itself.

How to Play Heist

Playing the game means following a few simple steps. As usual, you need to select the size of a coin, and this is achieved by changing the value by hitting the coin bet button. You also need to choose your bet per line by following the same steps, which then shows you how much your entire bet is going to be. After this, hit the spin and see what happens.

The game does have a number of bonus features, including an expanding wild symbol. However, while the idea of wilds and free spins is common with bonuses, this game has a different wrinkle. Here, you have to decide as to how long you want to leave the bank vault open. Close it too early, and you miss out on big prizes but leave it open too long and you are caught and leave with nothing. This is certainly tense, but at the same time, there’s a thrill to it as you try to judge what to do next and which risks to take.

Betting and Payouts for Heist

The first thing to mention here is that the game does have an RTP of under 94%. This is on the low side, so that may be enough to put some people off giving it a shot, though this could have to do with mistakes made in keeping open or closing your cault. The coin range runs from 0.02 up to 1, which is pretty normal, while the maximum number of coins you can bet per line is set at 5. If you then take all 30 paylines, it does mean a bet of up to $150 as a maximum. However, the payouts are nothing amazing. You can win up to 50x your bet at various times, but compared to other games this is also on the poor side.

Heist does promise a lot with its money-making theme, and the bank vault game is a nice touch. The problems are the lower RTP and the lower prizes. This may turn many off the game, but the low buy-in and minimums make it an okay game to try out.