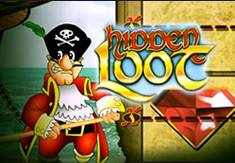 Hidden Loot is a slot game from Betsoft that’s going to take you on a pirate adventure out on the seven seas. Now, it’s hardly the first slot game to have this theme, but with Betsoft often doing things differently when it comes to bonus features, we need to see if this game offers anything special to reel us in.

The main character here is Captain Peg-Leg, and he’s taking us to a desert island where he has heard there’s some buried treasure. As a result, the reels are set against this desert island background with the captain himself standing there watching over us at all times. Also, you will notice that this game only has 3 reels and, at the same time, it only contains 3 paylines. The symbols used do reflect the pirate nature with the captain himself, skull, and crossbones as well as various jewels making an appearance.

How to Play Hidden Loot

Playing the game is as easy as can be. Obviously, you need to work out how much you plan on betting, and this is done by changing the coin size option on the screen. Also, even though only 3 paylines exist, you can still place a bet per line by changing the options on the relevant button. This changes your total bet of course, at which point you can spin to win.

There are several cool bonus features. First, land 3 logos and you open up the bonus game, where the captain digs a tunnel to find the treasure. You then need to navigate him through the tunnels using arrow keys, and you have to try to collect 10 jewels in a set time. However, make sure to avoid the skeletons as they will catch you and the round will come to an end.

Also, you will notice that there is a hold reel option. This can prove to be useful when triggered since it does mean you can choose a reel where you love the symbols sitting there on the paylines, in the hope that those free to spin will play ball and land you a big win.

Betting and Payouts for Hidden Loot

Considering there are only 3 paylines and 3 reels, the bets and payout options are more extensive than you would expect. First, the coin range starts at 0.02 and goes up to 0.5, which is very reasonable. Also, you can bet as much as 5 coins per line giving you a maximum bet of 15 if playing all 3 lines. Prizes are activated when you land 3 symbols. The highest paying is the captain who will give you 250 coins, while it then drops to 100 for pirate ships.

Hidden Loot is certainly a fun game, and the bonus game is very different to anything else that’s out there on the market. The bonus game alone is a good enough reason for experienced players to give this game a shot, and with low bet options as well, Hidden Loot should be attractive to novices too.