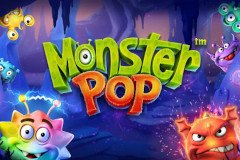 Monster Pop does have a cool sounding name and then you see the graphics which just takes everything to a whole new level. These cool monsters aren’t scary, but they are bright, colorful, and add a real sense of fun to this slot game. Running on a 5×5 reel, there are ample opportunities to win big on this game, but only if the monsters are on your side.

Created by Betsoft, Monster Pop introduces us to various colorful monsters with a dazzling array of numbers of eyes. It has medium volatility as well as an RTP of 94.7%, and this is lower than a number of other Betsoft games. However, it’s so easy to be caught up in this bold theme that the slightly lower RTP won’t be something that you think about that often. Also, this game is 2-dimensional which is slightly different from what Betsoft has been developing lately, but there’s no doubt you will love the way that this game looks.

How to Play Monster Pop

Playing this game is going to be very easy even if you are new to the entire slot game idea. Simply decide on your bet and then hit spin. With this, Betsoft has made things as simple as possible, which is why it’s a great game for people new to slots. Also, they don’t include various paylines which does make it easier to follow and to keep an eye on how much you are betting.

This game has various bonus features including wilds, free spins, and a special monster based game where you can end up winning various prizes. Look out for the flaming sphere symbols to then access free spin rounds. You may not win prizes as a direct result of this and then there’s the special Monster Fury round. With that, it appears even during losing rounds where monsters come along and turn a losing round into something that is substantially better for you. This alone is a cool idea and makes great use of the theme.

Betting and Payouts for Monster Pop

With betting, then the smallest amount is set at $0.25 while the biggest bet you can place is an impressive $250. When it comes to the jackpot then you stand to win 2270x your stake. What that means is that you could end up winning $56,765 which is a nice sum of money to then pick up. However, there is no progressive jackpot with this game, but then at least you know what you could win in advance.

Monster Pop is a cool game and even though the RTP is lower than you would see with most games, the fun factor should still convince you that this is well worth checking out. The monsters are a whole lot of fun and the cartoon nature of them does mean they make you smile rather than being scared. With simple gameplay, you have the potential to win an impressive sum of money but only if the monsters believe you are worthy of winning the jackpot.