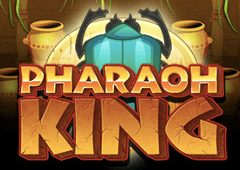 Pharaoh King is your typical slot game with an Ancient Egyptian theme, so from that aspect, there are certainly no surprises. With typical big and bold graphics, as usually found in Betsoft games, it offers you the chance to play for both coins as well as real money.

This game offers you 5 reels along with 20 different paylines, so you do have ample opportunity to win with each spin. The symbols include the common K, Q, and J as well as a number of other symbols more closely linked to Ancient Egypt. That means symbols such as the scarab beetle, pots, and pyramids along with several others.

How to Play Pharaoh King

Betsoft has made sure that this game is easy to play. The first thing you need to do is to choose your coin size. Then, you get to select the number of paylines that will be activated. You can choose your bet per line which then shows you how much you are betting overall in the bottom left of the screen. The only thing left to do is to hit the spin button, but if you want to place the maximum bet then this can be achieved by clicking the relevant button.

This game does come with both wilds and scatters to add some extra intrigue to the entire game. Also, with Pharaoh King, the scatter symbol is the pyramid and it can pay in any position. For the wilds, then they will change any symbol aside from the scatter with it increasing your chances of winning big.

Another bonus game is focused on three doors at the top of the screen along with three keys. Land the three colored keys on the reels over time and the tomb behind the doors will open. Then, a second bonus screen pops open where you are faced with six different urns. Choose one to then see the prize contained within. Keep on clicking urns to win more prizes until you are then sent back to the initial game screen.

Betting and Payouts for Pharaoh King

In this game, the coin range starts at 0.02 and goes up to a maximum of 0.5. However, if you want to play the cash game then the minimum bet per spin is $0.4 while the maximum bet is set at $50. This is lower than other games by Betsoft, but the game also then has a progressive jackpot which can only be won when you have placed the maximum bet. The RTP is 95%, but the game has a high volatility rating, so do expect to come up with nothing on a number of occasions.

Pharaoh King is a cool game, and while it may not incorporate the usual level of graphics and 3D nature as seen with other Betsoft games, it’s still pleasant to look at along with being fun to play. If you love Egypt and the idea of playing a slot with that theme, then this game could be perfect especially with the low minimum bet levels.