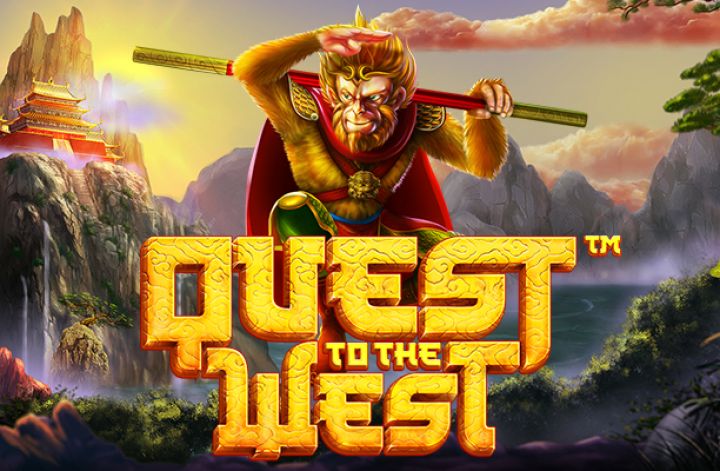 Quest to the West is a slot game developed by Betsoft that’s going to take us over to China. Even though a trip to China is hardly new, this game does give a different angle to it as it focuses on a Chinese legend, the Monkey King.

Overview of Quest to the West

This game offers you 5 reels and a total of 25 different paylines. The graphics are what you would expect from Betsoft, with the reels set against your typical Chinese countryside background complete with a temple on a mountain. For the symbols, aside from the usual card symbols, you can also look out for the Monkey King himself, other warriors, some strange pig men, lotus flowers, and dragons.

How to Play Quest to the West

The game is very easy to play, as is the norm with games from Betsoft. You need to choose your bet size by clicking on the appropriate buttons to change the value. We do recommend going for the bet you can afford when playing the full 25 paylines, as the variety of ways in which you can win is pretty impressive. After settling on your bet size, hit the spin button to set those reels in motion.

Bonus Features for Quest to the West

The bonus features are mainly focused on the idea of walking wilds. This means they can appear from any direction and then swap out other symbols for themselves in order to bolster your chances of grabbing some wins. This is seriously cool, and it also boosts your odds. These wilds will also swap itself in for other symbols, so that’s where your chances of winning will be increased.

So, what you need to look out for is the Monkey King symbol. Land him, and he walks off to the side of the reels with some cool animation. As he jumps off the reels, you add a number to the total. Build your total and you will then win an instant prize.

Also, land at least 3 scatters on the reels, and you will then be able to generate the free spins option. If the Monkey King stays on the reels during these free spins, they can be re-triggered.

Betting and Payouts for Quest to the West

This game comes with medium volatility, and it has an RTP of 97.53%, which is above the average for this kind of slot game. The minimum bet is set at 0.2 credits, while it can go all the way up to 80 credits per spin. There’s also payouts to consider, and that is where it gets interesting.

Overall, we think that Quest to the West is a pretty decent slot game developed, but it could perhaps do with higher payouts. However, with an impressive RTP, they perhaps thought it best to drop the prizes thanks to the number of times you could win and the consistency you can have in this game.