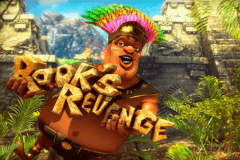 Rook’s Revenge is a fun-filled slot game developed by Betsoft that’s going to take us to the world of the Aztecs. Now, this is slightly different from the norm, but it’s not unique. Hopefully, Betsoft has been creative with the theme and bonuses to give us something different from the usual.

The game comes with 5 reels and offers 25 paylines. The reels are set against an Aztec pyramid, which is cool, and then the Aztec King himself is standing by the reels to remind you that he’s there and watching. The symbols also tie in perfectly with the theme, so keep an eye out for the likes of a Golden Mask, other masks, and a strange kind of question mark (but more on that particular symbol later).

How to Play Rook’s Revenge

In order to play this game, you need to choose both your coin’s size and bet per line. Of course, this is then multiplied by the number of lines you are betting on, so try to avoid being caught out with betting more than you intended. Once you have changed those values, then you are ready to spin.

Like most, this game does come with interesting wilds and scatters. In this instance, the Golden Mask acts as the scatter, and it will provide you with some free spins. Land 3 of them and it leads to 10 free spins, but you also have multipliers with these spins that will start at 3x and go up to 15x. This bonus can also be re-triggered.

The wild symbol is the question mark, and it’s going to work by substituting itself for any other symbol including the scatter. However, it only appears on reels 2, 3, and 4.

The coolest bonus feature has to be the win multipliers. After landing a winning spin, all of those winning icons fall from above and you then have a chance to grab more wins in the process. Once again, wins can be multiplied with this.

Betting and Payouts for Rook’s Revenge

Coin denominations range from 0.02 to 1. When it comes to coin bets, then the minimum is $0.25 while the maximum bet is set at $125 per spin, which is actually quite normal as a betting range. When it comes to the payout, the maximum you can ever hope to achieve, which does depend on you placing the maximum bet, is $12,500. That is quite reasonable as a payout, but do also remember that the game comes with an RTP of just over 95%, which is around average for this type of slot.

Overall, Rook’s Revenge at least has some fun attached to it such as when the King dances around with any winning line. It flows quite smoothly, has nice enough graphics, and has a wide enough betting range to allow anybody to take part, no matter their own individual levels. If you want to give a slot game a shot, then this version provides a simple introduction to this form of gaming.