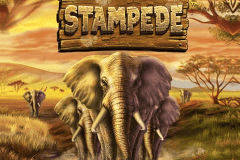 The stampede video slot is an online slot with 5 reels and 243 pay-lines. That’s two hundred and forty-three ways to win. This online slot is set under the setting sun in an African Jungle, and you know there’s nothing more beautiful.

The enchanting African landscape is the backdrop of this video slot. African animals are represented in the symbols of the game. The anticipation of pandemonium keeps you on your feet as you play to win in this online slot. Explore the natural beauty of the African Jungle in this latest online video slot.

How to Play Stampede

To select your bet amount, you click on the ‘Bet’ icon to set your wager. The two hundred and forty-three pay-lines remain active throughout the play period, but they cannot be changed once you commence.

The symbols in this African themed video slot are; the buffalo symbol, the lion symbol, the cheetah symbol, the rhino symbol, the nine, and the ten symbols; and of course the Queen, Jack, King, and ace symbols.

There is also an autoplay option for you. If you wish to take a break, maybe grab a burger or two without having to stop the game, then you can switch to the autoplay feature. You can keep playing without actually playing. Get it? You can set up from ten to one hundred spins to play automatically.

First, the wild symbol. This is represented by the sun symbol, and it only shows up on the second, third, and fourth reels. It can act as a substitute for any other symbol to form combinations that will guarantee wins. It cannot substitute for the scatter symbol.

Collecting three or more of the elephant symbol anywhere on the reels sets off the free games feature.

The free spins feature. You are awarded up to twenty free spins when you collect three or more scatter symbols. This feature can also be retriggered. It can be retriggered up to fifteen times.

This game is available on the web and therefore requires no downloading. It can be played on any IOS, Android, and desktop devices. There is also a free version if you want to play it safe, so go ahead, and give Stampede a try!