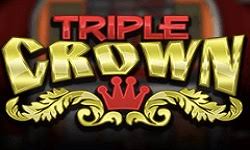 Triple Crown is a slot game developed by BetSoft that is aiming to take the classic appeal of a slot game and to do so in a modern way. In other words, you perhaps shouldn’t expect all the bells and whistles that generally come with video slots or you will end up being rather disappointed in things.

The game only has 3 reels and 1 payline, so there’s the classic slot game in an instant. The design is also clearly based on the traditional slot machine found in casinos, and while it means basic graphics, it’s still all well put together. There’s still a theme attached to the slot, and it’s focused on the Arabian nights’ concept. That means the symbols that appear include an Arabian ruler’s palace, magic lamps as well as triple crown logos, and various options when it comes to bars. Basically, they are a blend of traditional and theme, and it also works well.

How to Play Triple Crown

To play this game you need to set up your bet size. Start off by choosing your coin size using the value selector. Alternatively, you could go ahead and hit the maximum bet button to speed things up. After settling on your bet size, you just need to hit the spin button to set the reels in motion. When you spin them, you will at least get to enjoy sounds such as coins falling into the slot when you spin the reels, the reels clanging as they spin, and anything else that will simply add to that kind of authentic slot game experience.

This won’t be a huge surprise, but Triple Crown doesn’t have any kind of bonus features or games. There are no wilds, scatters, or multipliers, but they did say they were sticking to the traditional way of things, so it would be weird to then include bonuses. While it’s strange not to have anything, it does create a sense of simplicity to the game that is also refreshing in its own way.

Betting and Payouts for Triple Crown

The coin range available with Triple Crown starts at 0.02 and goes up to a maximum of 1. It’s possible to win a maximum jackpot of 5000 credits, which is pretty good considering the size of the bet that’s available. In order to strike it lucky with the jackpot, you need to land 3 of the Triple Crown logos across the payline. You can check out the other payout levels on the top half of the slot game as they are listed just as you would expect to see on a traditional casino based slot game.

Overall, Triple Crown is a traditional style casino slot game designed for playing online, and even though it doesn’t pack the same punch as video slots, it’s still a viable game. Yes, there are no bonus options available, and you only have the one payline, but if you wanted to know what it was like to play a slot game before things became elaborate, then this could very well be the game for you.