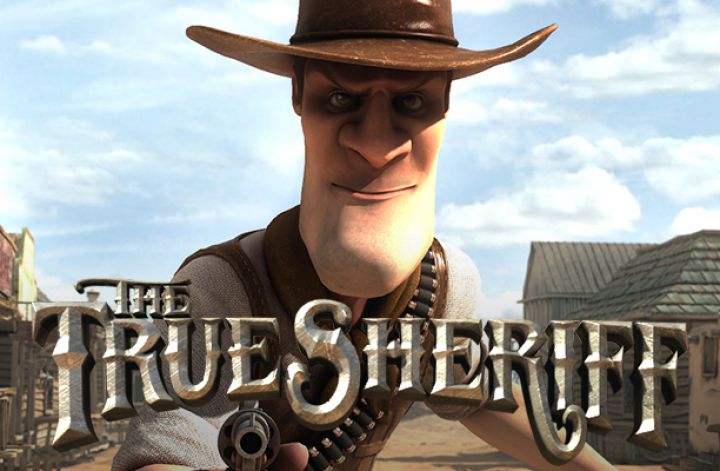 True Sheriff is a slot game developed by BetSoft that has the Wild West as its theme. Now, this isn’t the first time that this theme has appeared, so what makes the game stand out from the others that have already ventured down this path?

Overview of The True Sheriff

This game brings into play 5 reels and a total of 30 paylines. It contains various bonus features, sounds that throw you back to the Wild West, and video graphics that are perhaps some of the best out there on the market. The reels are set against a backdrop of a town that wouldn’t look out of place from any Clint Eastwood movie.

The symbols on the reels stick to the theme because, aside from the card symbols, you will hope to land the likes of guns, the sheriff badge, the sheriff himself, and various other characters that all form part of the town and theme. Overall, it’s off to a good start.

How to Play The True Sheriff

In playing this game, you need to select the credit per line by using the slider on the bottom of the page. You also need to use the paylines option to change the number of lines that are brought into the spin. You can go ahead and hit the autoplay option if you are happy with the values to speed things up. Once ready, hit the spin button.

Bonus Features for The True Sheriff

The game gets quite interesting when it comes to bonus features. There’s a random wild which is triggered as soon as the sheriff fires his bullets into the game. This is all achieved via the gun symbol, which is the wild, and it’s going to pop up only on the middle reel. After it appears, it triggers the wild gun feature. When the sheriff fires his gun, he hits 5 different symbols. Those symbols become the wilds leading to a huge boost for landing some potential wins.

As another bonus, if the gun symbol appears in between the bad guy and the sheriff symbol, then you will activate the showdown feature. This is a simple head or tail bonus that continues to replay until you lose. With each win, your prize gets bigger.

Finally, there’s a third bonus feature known as the ‘Overnight Watch’ game. You need to add certain special symbols throughout the free spins option, and eventually, it leads to you meeting up with the sheriff at night. Here, you get bonus credits that can add up to a reasonable prize.

Betting and Payouts for The True Sheriff

The minimum coin size is 0.02 while the maximum is 0.5. The maximum bet size is set at 150 credits, so this equates to $75. With the payouts, the maximum you can land is 15,000 coins, so that is quite cool even though it’s not as high as you may win elsewhere. Other payouts are also reasonable in size if you land 5 of the same symbols. However, it’s the wild symbols that payout the most, so keep that in mind.

True Sheriff is a cool game that has wonderful gameplay and bonus features that mark this out as being different from the other slot games out there.