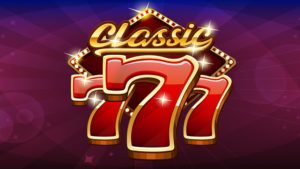 Real-Time Gaming has sought to bring back classic style slot games in various ways, and 777 is one such game. It should come as no surprise to discover that a game with this title is focused on the traditional slot machine, but is there a need to become aware of other things before delving into the game?

This game takes things back to basics by introducing only 3 reels along with the single payline. Also, the graphics are relatively basic in nature, but in a way that adds to the overall sense of what this game is trying to achieve. The symbols used in the game are also along familiar lines to anybody that has found themselves in a casino playing slots. Basically, look out for lucky 7’s, variations of numbers of Bars, and a pile of cash.

Considering we are looking at a classic game, the idea of it having bonus features may feel a bit alien. With this game, it does come with a ‘Hold’ function but sadly that is it when it comes to bonus features. There are no wilds or scatters to report, and no second screen bonus games to report either.

The cool thing about a classic game is that it does tend to mean that playing the game is as straightforward as it can get, and 777 won’t let you down here either. In fact, all you need to do is to choose the size of your bet, within the limits, and then hit spin. After all, with it only containing the one payline, it does mean you know immediately what your final bet is going to be rather than it is a culmination of adding lines and everything else. Once you settle on your bet size, hit the spin and see what happens. Also, remember the hold function if it’s activated as that can make a difference to potentially winning.

First, this game comes with an RTP of 97%, and that is very high. Also, the maximum payout you can hope to achieve is the equivalent of 100x your initial bet. Where it does act differently is with the range of bet. The minimum bet per spin is $0.1 while the maximum is a stunning $200. In other words, hit the jackpot with that maximum bet in place could net you a total of $20,000. This may be lower than you can get elsewhere, but it’s still a healthy return if you strike it lucky.

777 is nothing special in either its design or gameplay, but it does everything well and it acts in the way you would expect a classic slot game to act. The RTP is impressive, but at the same time, the lack of bonus features could be enough to stop some people from giving it a go. However, we feel you would be missing out on discovering all about the original essence of the slot game genre.