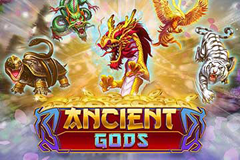 Ancient Gods is an online slot game developed by Real Time Gaming with a distinctly mythical approach to its theme. It goes big for animation, graphics, and gameplay, but it’s not the only one that has incorporated mythical beasts into slots. So, is this one any different, and is it worth playing?

This game uses your common 5×3 reel setup while it also incorporates a total of 25 different paylines. Clearly, this offers you various ways to win, and the entire interface is set against a mythical landscape in China. The symbols that appear are also mainly Chinese in design, and that is why you have symbols such as the dragon, white tiger, and several other ancient Chinese deities.

How to Play Ancient Gods

This game is going to be easy to play. You must begin by selecting the size of the coin you wish to bet with, and it’s controlled by the arrows around the Bet button. RTG also still allows you to change the number of paylines that come into play, and this is also done via the arrow buttons. All that’s left is to hit the spin and see what happens and if luck is on your side.

This game introduces both wilds and scatters symbols, and both improve your chances of winning in multiple ways. However, in this instance, there is little in the way of multipliers which may be a slight disappointment to some people.

With Ancient Gods, the yellow dragon is seen as being the top symbol, and it also acts as the wild symbol capable of substituting other symbols to produce winning paylines. Also, he has the ability to transform each and every symbol on the interface, if he wants to do so.

If you land at least three scatter symbols, then you trigger the free spins bonus. Land four of them, and you double your number of free spins. Also, remember that there may be times where both wild and scatter appear at the same time which then leads to huge wins.

Betting and Payouts for Ancient Gods

The bet range available on this game starts at $0.01 and goes up to $1. However, when you then add in the different paylines it does mean the maximum bet is set at $25. There are instances where the maximum payout reaches 4400x your initial bet, so that means you could win a pretty impressive amount of money. The game also has medium volatility, so there’s real potential to get some kind of win on a regular basis.

Ancient Gods is an average slot game that’s rescued by the way in which there’s a low minimum bet. The game itself runs smoothly, the theme is quite common, and overall the feeling is that this game doesn’t disappoint while also doing nothing to really stand out from the crowd. However, if you want to check it out, then you have little to lose, and we mean that even in a monetary sense if luck is against you.