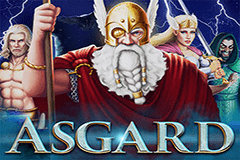 Asgard is a different slot game that is based around the idea of Norse mythology. This is certainly a more unusual theme from the norm, and finding something different to check out is always a cool thing to do. So, what should you expect from this theme, and is it worth giving it a go?

Asgard contains a 5×3 reel along with an all-ways approach when it comes to the paylines. This does make the game stand out from the rest simply because we are so used to a limited number of paylines coming into fruition. The reels are set against a dark sky with the Northern Lights blended into it which does give it a different feel. The symbols include different Norse Gods as well as the usual symbols that you tend to find across various slots.

How to Play Asgard

So, to play this game involves a few simple steps to be followed. Of course, you need to kick things off by selecting the size of your bet, and to do this you need to hit the arrows beside the bet button in order to change the value up or down. As this game comes with the ability to win in any line, there’s no need to go ahead and choose the number of lines to be involved in your bet, so that removes a step you may see elsewhere. Finally, you simply need to hit the spin and see what happens.

Another area where the game is different comes in the form of the bonus games which are primarily focused on different Norse Gods. This ultimately leads to a variety of chances to grab some free spins, and this can be as many as 30 spins, as well as multipliers via wilds and scatters. At the same time, it also has another special bonus feature that can be triggered at any point which allows for a Thunderbolt to spread across the screen. When that happens, it means all five reels are converted into the wild symbols resulting in various ways to win a number of prizes at one time.

For symbols to look out for, then the Golden symbol doubles prizes. Also, Freya will trigger free spins when you land three or more and you get 15 spins. Loki will land you 20 spins while Thor gives you 25 spins and various multipliers as well.

Betting and Payouts for Asgard

This game comes with an RTP in the region of 96%, so that does mean that it’s slightly above average for slot games. It does also come with a jackpot of 6000 coins, which is not too bad even if it is lower than other slots out there. The betting range is between 0.03 up to a maximum of 7.5 which is a reasonable range.

Overall, Asgard is certainly different from other slots out there in both its theme as well as the number of bonus options that can be triggered by a wide range of symbols. This does make it more exciting than you may have initially expected and with an RTP of 96% there’s every chance that you could end up winning big at some point.