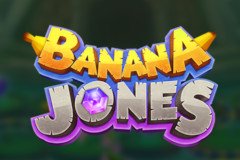 Created by Real Time Gaming, the slot game ‘Banana Jones’ is as much fun as you would have perhaps guessed it would be by the name alone. Released back in 2018, it’s packed full of features, so let’s check it out in more detail.

This game comes with a completely different appearance and setup than you would have ever seen elsewhere. Instead of reels, it looks more like a board game so it does take some getting used to as it’s not what you would expect. You don’t have symbols to look out for and the overall idea of the game is to take Banana Jones to the temple. There are various events and prizes along the way but the first thing that strikes you is the way in which this isn’t along the lines of a normal slot.

How to Play Banana Jones

Our main focus here is on how to play the game which does resemble ‘Snakes and Ladders’ in a sense. You need to state how much you are willing to bet in order to have five throws of dice. Once you settle on this, you then throw the dice and move through the board as a result. Here, if you land on a gem, then it’s stored to one side. Collect enough gems, and you stand to win a prize.

However, land on a sleeping monkey and you activate the statue. This then fills up the screen and up pops a bonus wheel to spin. This will then provide you with a prize that can be anywhere from 0.1x to 50x your initial wager. Get higher up towards the temple and watch as your prizes increase as well. Of course, land on a vine and you slide back down the board just like the original kids game.

As this game is different from the norm, there are no wilds or scatters. Also, there are no bonus games, multipliers or free spins as you aren’t actually playing with reels.

Betting and Payouts for Banana Jones

As we said, you choose how much you want to bet on those five throws. Also, you always get those five throws no matter how much money you throw at it. The actual coin range available starts at $0.2 for those five throws up to a maximum of $5. The jackpot with this game is set at a maximum of 2,565x your initial wager. If you placed that $5 bet then you can see that this equates to a cool sum of money. Do note that this game doesn’t come with your typical RTP, so we can’t be sure as to what the odds are for you having some successful throws.

Overall, this game is a bit hit and miss. While it’s good to see something different being tried, it does come across as taking some getting used to, and that’s a problem. Yes, you can win various prizes and treasure chests, but if you are searching for your typical slots game then this is not the place for you.