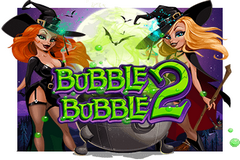 Bubble Bubble 2 is the sequel to the previous slot game known as Bubble Bubble. While the name may not be that different, it’s best to look at whether or not there are any other differences to be aware of before diving into the game.

Once again what you have here are 5 reels and a total of 50 different paylines, so no change there then. Also, the theme remains the same with the reels set against the same spooky, Halloween inspired background. When we then look at the symbols used, then this is where it starts to become different. In the first version, there was one witch but now they have doubled up with two. Aside from two witches, there are bats, cauldrons, animal skulls, and other symbols that do fit in perfectly with the overall theme.

How to Play Bubble Bubble 2

To play the game involves you starting off by selecting the size of the coin you wish to play with. As is the norm, you can change the value with ease by clicking on the up or down arrows beside the bet button. However, this game won’t allow you to change the number of paylines that are coming into play as you will automatically play all 50 just as you did with the original version.

Here, you have both the Great Ghost feature and Ultra Bewitched. Both features can offer up to a total of 42 free spins while multipliers can climb as high as 9x your original bet. But even that’s not all with bonus features. Instead, there’s also a special win-win combination that is triggered by landing both of the witch symbols.

Betting and Payouts for Bubble Bubble 2

The bets and payouts are where things start to become very interesting. The jackpot on Bubble Bubble 2 can be as high as 9000x your initial bet, amounting to an impressive sum. Also, the coin size can vary from 0.5 up to 12.5, so when you multiply that by all 50 lines then we are talking about the potential to win a lot of money. The game does also come with an RTP of around 96% which is slightly above average for this type of slot.

Overall, Bubble Bubble 2 is a seriously cool game with stunning graphics that significantly add to the gameplay. While a lot hasn’t changed from the original game, the inclusion of two witch symbols that both act as wild and scatter, along with the win-win option does mean that it’s enough to tempt people into giving it a shot and see if they perhaps have more luck with this version as opposed to the earlier version.