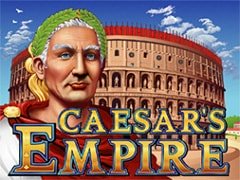 Caesar’s Empire is a slot created by the busy team at Real Time Gaming and, somewhat unsurprisingly, we are being taken back to the time of the Roman Empire. This is slightly more unusual as a theme compared to so many others out there, but is there anything else that you need to be aware of before placing your bets?

This game comes with 5 reels and a total of 20 different paylines. Also, it’s a progressive slot so be aware of that ever-increasing jackpot springing up at random times. The reels in this instance are placed against the Colosseum while the symbols incorporated into the game include various Roman-inspired images including the Colosseum, a Roman helmet, a shield, Caesar, and the usual card symbols.

How to Play Caesar’s Empire

To play this game, you need to start off by selecting the coin size, and this is done using the normal method of hitting the arrow buttons beside the bet button to change the value. Next, select the number of lines to be brought into play, and this is going to be changed using the exact same method. Finally, hit the spin button to see whether the Romans are on your side, or not.

The game comes with both wilds and scatters, so there should be enough to keep you busy regarding the bonus features. This time, the wild card is represented by Caesar, and it’s going to land on reels 1, 2, 3, and 4. When it does, then any wins are going to be paid out at 3x the normal rate, and that’s pretty good for the wild.

The scatter is represented by the Colesseum, and this time you want this symbol to appear on reel 5 while a Caesar icon appears on one of the other reels. When this happens, you get 10 free games, and this time Caesar can appear on all 5 reels to then convert other symbols and increase your odds of winning. Also, land other Caesar symbols during these free spins and you win an additional 5 free spins on each occasion.

Betting and Payouts for Caesar’s Empire

The coin range with this game varies between 0.01 and 0.25, but when it comes to lines, then you are allowed a maximum of 1 coin per line. Of course, that then means a maximum bet of $20 if you plan on playing each line. Regarding the jackpot, then 5 Caesar symbols are going to result in you winning 2,500 coins which may be lower than you expected. However, the game does have an RTP of around 95%, so at least there’s a fair chance of landing some wins on a regular basis.

We feel that Caesar’s Empire is a pretty reasonable slot game with nice enough graphics and gameplay to keep you interested for some time. While the payouts are lower than people would like, there is a good chance of getting some kind of return across the various pay lines, and with low bets available as well, you won’t have to risk too much money.