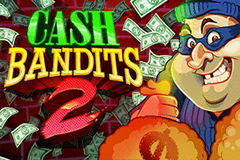 Cash Bandits 2 is the sequel to the previous smash hit slot game by Real Time Gaming. As with any sequel, there’s a need to be aware of any improvements in the first game, so is that going to be the case when it comes to this particular game?

The game starts off with 5 reels and offers a total of 25 different paylines. Like before, it focuses on the cops and robbers theme and also incorporates the same fun graphics as before. The symbols used this time include the robber, as always, along with the logo, money bags, burglar alarms, keys, and more. This all adds to the overall feel of the game, but then there are the bonus games.

How to Play Cash Bandits 2

In order to play the game, you must start things off by choosing the size of a coin. This is achieved by flicking through the options via the buttons, and then you need to choose the number of lines that are brought into play. As a result of this, your total bet is also multiplied. Once you are ready for it, you then hit the spin and see how the reels land for you.

The game has both wilds and scatters, so you can see that there are a number of potential bonus features that could come into play. The logo is the wild, and in this instance, it’s going to exchange all of the different symbols for itself apart from the scatter. It can also go ahead and create its own wins as well as develop others after swapping out the symbols.

The scatter is represented by the robber, and any scatter wins are then multiplied according to the bet. You also want to try to land 3 of them as a minimum as this opens up the vault feature, which is going to be familiar to anybody that played the first version.

The vault game has the ability to offer you a 17x multiplier as well as a maximum of 190 free spins. Last time out, you had 4 vaults but this time there are 5. You still need to complete the passcode, and that is where the fun comes in even though it’s not easy, the prizes that come out of it are rather impressive.

Betting and Payouts for Cash Bandits 2

The coin range here runs from 0.25 up to a maximum of 6.25. That does mean there’s a reasonable sized maximum bet but then there’s the jackpot as well which is a progressive jackpot. It can be triggered at any point, and then you have those multipliers for smaller wins that turn something relatively inferior into something seriously impressive.

Cash Bandits 2 is a reasonable sequel to the first game, and it comes with a number of different bonus features that stand out from the norm. Yes, so many aspects are the same as the first game, but the graphics and gameplay are wonderful, and that alone is enough for you to go ahead and check it out.