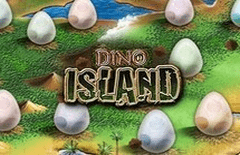 Dino Island is an action-filled slot game and one of the oldest RTG entries into the online casino gaming industry. Although there might be some sort of relationship between Jurassic Park and Dino Island, RTG has done a great job of keeping this slot game as original as possible.

Like the beasts in the game, the aesthetics in this game is not only atmospheric but also moody.

The high-quality visuals and the mysterious animations definitely do the game some great justice. The backdrop of the game features an earthly/rocky image. That said, Dino Island is a ferocious game that offers players plenty of adventure and a small story guaranteed to throw you into the confines of something new and exciting; something Jurassic.

How to Play Dino Island

Being a classic 5-reel slot game, the Dino Island slot comes with 5 reels and 25 pay lines. Before placing a wager, players should first adjust the bet and line amounts using the up and down arrows. The entry point on each line is 0.01 while the limit is 5.00 for each spin. After a player decides on the bet and line amounts he then proceeds to play between one line and the other 25 pay lines. If you intend to use the same amount of wager on all your spins, then you can turn on the Autoplay feature which will go a long way in making your work easier.

Symbols in the Dino Island including a falling asteroid, the game logo, dinosaurs, and the classic poker symbols such as Number 10, J, A, and Q. The falling asteroid is the game’s wild symbol and can substitute all the symbols in the game except for the scatter symbol to create a winning combination. Like other slot games, the wild symbol in this game triggers the free spin features. All the winnings resulting from the substitution will automatically be doubled.

Not only do the wilds appear in free games to create winning combinations they also create a bonus opportunity to win big. The scatter symbol is the game’s logo. It can form a winning combination at any point. Each of your scatter wins is multiplied by your total wager. Dino egg bonus is activated by bringing three scatter symbols on reels 1,3 and 5 together. This bonus can also help you earn free spins.

Betting and Payouts for Dino Island

Like other RTG titles, Dino features a progressive jackpot that can be won at randomly after every spin. This means that any real money spin that is made in Dino Island could win a player the jackpot regardless of the wager placed. It is also important to note that the bigger the wager placed per spin, the higher the player’s chances of winning.

Dino island slot game is compatible with almost any device that you could think of, whether you are using an iPhone or an android, an iPad or a tablet, a laptop or a MacBook or even a desktop you are able to enjoy this game on any device. Due to its compatibility with almost each and every device, you are able to enjoy the game no matter where you are. You can either download the game directly from Google Play Store or use the instant play option.

Take a trip back to the Jurassic era and enter into the world of flying reptiles and vicious dinosaurs with razor-sharp claws. While Dino Island comes with a weak pay-table, players with deep pockets will definitely make some serious cash.