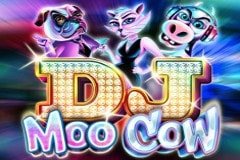 DJ Moo Cow is a well-designed disco-themed slot game by RTG that’s quite different from other titles with a similar theme. While other disco-themed feature blondes and brunettes in clubs, the clientele in DJ Moo Cow consist mainly of cats, bears, pugs, and a head-phoned cow as the DJ.

Unlike most slots that offer limited pay lines, this uniquely designed video slot has customizable pay lines, offering players plenty of winning opportunities. In addition, this slot game also has speakers at the four corners of the reels that play music when players spin the reels. Even though DJ Moo Cow is on the other side of the spectrum, it still offers players some comical relief.

From a purely visual perspective, DJ Moo Cow is not only well designed but also quite captivating. The graphics and animations in Dj Moo Cow have been perfectly done, all giving out a street vibe. With the farmyard disc jockey playing music at the nightclub, and other animals being the party enthusiasts, DJ Moo Cow game trivial humor will keep players entertained and glued to the game. The humor surrounding the game is perfect, making it a must-try.

How to Play DJ Moo Cow

The game plays out on a 5×3 reel configuration and features 25 pay lines that players can change between 1 to 25, using the slider on either side of the reels. Players can also choose the value of coins with 0.01 credit being the lowest value and 5 credits being the highest. Once the wager and the pay lines are in place, the Spin button will set the reels in motion.

While playing the base game, images of red records spinning to the right, and a blue mixing desk turning to the left will appear. When these two features appear, a player is supposed to hit stop when vinyl records hit their targets. With every target reached, a player gets either multipliers or free spin. Reaching a target and getting a multiplier or free spins continues until the collect symbol appears on the reels.

Designed with a variety of symbols players should expect to encounter Dj Moo Cow, the pug dog, bear, and the fancy cat. DJ Moo is the highest paying symbol and serves as the game’s scatter symbol. It appears on the first, third, and fifth reels. By landing five of these symbols players will be rewarded with a 2500x multiplier. The pug dog, the fancy cat, and the bear symbol follow as the second, third, and fourth high paying symbols respectively.

Other symbols in the game include the traditional card symbols of J, K, Q, A, 10, and 9. As expected, these are the game’s low paying symbols, and players will need at least five on a pay line to make good money. Like other RTG games, this slot is available to play on various online casinos.

DJ Moo Cow slot game is compatible with most devices. For instance, players using Linux, Mac, and Windows devices can play the video game directly from their browsers. The game is also playable on Android, iPhones, iPad and tablets.