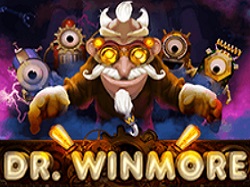 Developed by Real Time Gaming, Dr. Winmore is a slot game with the theme of a nutty scientist at its heart. This alone does come across as potentially being a whole lot of fun, but there are other key points to consider before throwing yourself into the game.

This particular game comes with a 5×5 setup and a total of 30 different paylines. This does mean there’s ample opportunity to win in this game, which has a certain steampunk feel to it. In this instance, the symbols reflect the mad scientist’s quiver of tools, so you can expect to see test tubes, flasks, and beakers containing different colored liquids on your screen.

How to Play Dr Winmore

The game is easy to play with only a few steps required. In fact, all you need to do is to select the size of your bet, within the desired ranges, and then hit spin. There are no additional complications set to trip you up on your way.

The first thing to check out is that Dr. Winmore himself acts like a wild man in the game. Here, he will replace any symbol on the reels apart from any of his robot helpers, and the aim is to help trigger the prospect of the cluster pay mechanism into action. With the cluster pay, any time you land four or more of the same symbol will lead to a multiplier not only being applied but increased in size. More on that when we look at payouts later.

Talking of the robots, they can blow up random symbols and trigger the cascade pay option, even when there are no winning combinations on the reels. This alone is a pretty cool bonus feature that can really increase your chances of cashing in.

Betting and Payouts for Dr Winmore

With payouts then, the maximum you will receive is 3000x your bet, but you need to effectively fill the screen with the highest winning symbol which, in this case, is the plasma ball. However, there’s the cluster pays mechanism to think about. Here, the symbols are changed by a cascade motion with new symbols from above. This then leads to you potentially picking up wins, and if there are winning combinations, then the multiplier added to the winning lines is increased. In other words, it’s not always what the reels land on that will be important.

Overall, this game is pretty cool, with the theme at least being slightly different from the norm. The cascade motion is also interesting, but it does take some getting used to when looking to see how successful your spins are. Also, if you prefer to place higher bets, then this game won’t be for you, due to the $2.50 maximum per spin.