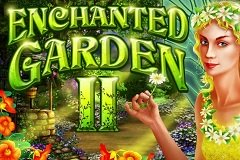 Enchanted Garden 2 is the sequel to a previous slot game produced by Real Time Gaming. The first game was a real success with smooth gameplay and was perfect for people with a preference for low bets due to its small minimum spend. So, is there anything different to expect with this version?

The game sends us back into the fantasy garden, but it’s clear that the graphics have been improved when compared to the first version. Also, while it still has the five reels, the game has increased the number of paylines from 20 to 25, and that does make a difference when it comes to potential wins. Once again, you have a bunch of magical, fantastical creatures and images for symbols, and there are still various bonus features included as well.

How to Play Enchanted Garden 2

Playing this game is identical to the first version. What this means is you need to choose the size of your bet followed by the number of paylines that are being included in the spin. This, in turn, leads to you having the total bet size before you go ahead and hit spin to see how lucky you turn out to be.

The first thing to mention is the wild, and in this instance, it’s the fairy princess, while there is also a scatter symbol, which is the Enchanted Garden logo. You need them to pop up, primarily on the first reel, to then trigger the other two main bonus features.

One game mentioned in the ‘Firefly’ feature, and when you trigger this, it leads to seven free spins. You know you are in this mode as the backdrop is covered by these insects, and if you land three of them, then you get three free spins. However, even if you land additional fireflies during these spins, the games cannot be restarted. On the plus side, any winning lines are paid out at triple the amount.

The other feature is the ‘Fairy Queen’ feature. Here, you win 10 free games, and if you land the princess on reels 2, 3, 4, and 5, then you get a little bonus added to it. Also, the wins are doubled during the spins even though the game cannot be re-triggered.

Betting and Payouts for Enchanted Garden 2

The RTP for this game is closing in on 97%, which is very impressive. Where things are different is that the coin range starts at 0.01 and goes as high as 1.00, which is substantially more than the previous version. However, the 1.00 equates to one bet per reel, so the maximum bet you can place is still $5. For the jackpot, the most you will win is 15,000 coins, since this is also a non-progressive jackpot.

Enchanted Garden 2 is a slight improvement on the previous version, especially where the graphics are concerned. The game runs smoothly and the increase in paylines is a welcome addition. With the low betting range, it still means it’s perfect for people starting out in the world of slots.