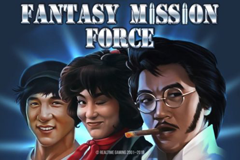 Fantasy Mission Force is a slot game developed by the people at Real Time Gaming, and what you have here is a game with a movie-based theme. Not only that, but you may also recognize the appearance of famous action hero Jackie Chan. What do Jackie and this game have in store?

This game comes with 5 reels and 20 different paylines, so you have ample opportunity to strike it lucky. Even though the game is not that old, the graphics do look outdated. However, it’s trying to replicate age-old movies, so this may be on purpose, and we’ll let it slide. The symbols are still pretty cool, with various martial arts weapons mixed in with several characters, one of which is Jackie Chan. Overall, the way in which the graphics have been pulled together does add to the feel of the entire game and makes it stand out a bit.

How to Play Fantasy Mission Force

With this game, you need to carry out two different actions before spinning. First, choose the size of your bet and move between the options with the plus and minus symbols. Next, choose the number of lines you want to bring into play. When doing this, it changes the total bet you will be placing, but at least they clearly state how much this is going to cost you before hitting spin. When you are ready, click that spin button and see what happens.

The first bonus to mention is the dynamite symbol, as this acts as the scatter. It can land on any reel, and the key is in how many appear. Land two and your prize for a winning line increases by 1x, but land 5 and it goes up by 200x, which is a nice little bonus. Also, look out for the wilds as they will not only double your winnings but also replace other symbols to increase the chance of hitting some paylines.

If you are lucky enough to land a scatter and a wild symbol on the same spin, then it triggers 7 free spins. During these spins, if you have any winnings, then you get a 3x multiplier as well.

This game does allow you to change your bet size with ease. In fact, the minimum coin size is just 0.01 while the maximum individual bet is $5 for a single payline. So, if you plan on playing all 20 lines, then it will cost you $100. For payouts, then the top symbol is the Amazon leader who pays out at 2500X your bet. Jackie Chan pays out at 500X, which is surprising considering he’s the most recognizable face.

Overall, Fantasy Mission Force is a funny slot game thanks to the graphics and general feel. it’s still enjoyable, with a reasonable range of bets and a progressive jackpot that could mean you strike it big. Of course, you need to have luck on your side in order to get those big wins, but anything is possible.