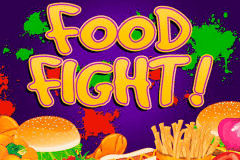 Food Fight allows players to use the free mode to play the game without depositing any amount. However, players who may want to play the game for money can choose to deposit funds depending on the payment method offered by their favorite online casino.

But, players don’t have to play with all the funds they deposit- instead they can enter a minimum of $0.01 and a maximum of $5 as bet amount per spin. Also, a player needs to adjust the number of pay lines they want to play with, between one and nine per spin. Plus, anyone can bet with the maximum of 45 coins with 9 pay lines by clicking on the Bet Max button on the game.

The Food Fight has one jackpot that pays when two things occur. First, a player wins when they see five ice cream bowls on a line after betting with the maximum amount. The player gets 6250 coins or enters the progressive jackpot. To the jackpot, players have to play five coins per line to qualify for a winning spot. Players who play with less than the maximum amount get between 1,000 and 4,000 coins when they get five ice cream bowls on a line.

The other pay is when a player gets five spaghetti and meatball symbols – they earn 3,500 coins after betting a max bet. Overall, Food Fight jackpot has 21 possible wins with pay starting with aligning two similar symbols.

Although Food fight comes with a variety of symbols, it lacks wild and scatter symbols. However, the symbols in the game represent big wins to substitute what special symbols would. Symbols found in Food Fight include tomatoes, pieces of cake, sandwich, pizza, ice cream cones, spaghetti, and meatballs. When three, four, or five symbols fall on a payline, a player is awarded a win.

Food Fight comes with two special bonus features. Both of these bonuses can be triggered by finding scattered ingredients that can be used to make either ice cream or cream pie. Upon finding a scoop of ice cream, a cone, and cherry symbols on any reel on one spin, the player gets the Ice Cream bonus unlocked. This bonus can award players with bonuses of up to 405 coins.

The other special feature is the Food Fight bonus that’s activated when players make a cream pie using various relevant ingredients scattered on the reel. By creating the cream pie, players are taken to a new game screen where they find five characters, including a heartthrob teacher, a coach, grunge rocker, hall monitor and lanky nerd.

Players can then choose which character to throw pies at. Every direct hit on the character wins the player a total bet amount and continuation of throwing the pies until they miss. The maximum a player can win from this bonus feature is capped at 3960 credits.

Food Fight is downloadable and playable on Android, iPhone, and Windows. The game is highly volatile, which makes playing it on phones or laptops exciting.