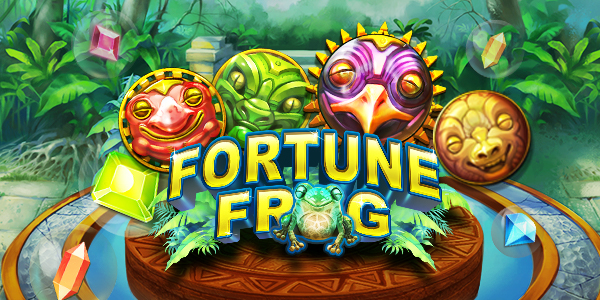 Fortune Frog is a highly engaging video slot game from Real Time Gaming with a return to player of 97.5 percent. This Chinese genre game is characterized by an ancient temple, jade frogs, among other creatures sitting on a modern design platform.

Although the design is different from other RTG releases, this 2019 release offers excellent opportunities for winning. Contrary to how players spin the reels on other slot machines, the reels on this game are fixed, and the frog does the firing of symbols that fall all over the grid. It’s an exciting and unusual video game players need to try.

How to Play Fortune Frog

This edition has over 20 pay lines, which means players can stake between 0.01 and 1.00 coins per line. Overall, a player can place between 0.20 and 20.00 coins per spin. A player can take a step back from the game by allowing the autoplay feature to do all the work. By setting up to 100 spins, a player can sit back and watch wins come in from afar.

Instead of spinning the reel, the Fortune Frog will open its mouth and release 15 symbols that will land on the grid when the play button is pressed. If there is any hit on one of the players’ paying lines, the cascading reels take over, and winning symbols disappear. The remaining characters fall lower, and the frog fires more symbols onto the reels.

Players have to add the stake amount before every spin or, in this case, before the frog fires more symbols.

Fortune Frog has many symbols. Eight of these pay left to right, whereby a player earns big when three characters appear on a pay line from left to right. When a player gets four creatures of the reels, they get bigger and better pay. The gems are the lowest paying symbols and come in four different shapes and colors. Each color and size represent a specific value of the gem.

When four symbols land on the grid, the player gets a generous win. In fact, the highest paying symbol rewards players with up to 150x the bet.

Unfortunately, this title lacks the wild and scatter symbols, which means players won’t find free rounds. But, the game has a Cascading Win feature. This means players can get more winnings when a new winning combination replaces the previous winning symbols. When the feature is active, the spin button is inactivated.

The other bonus feature is the Frog Bombs. When four bombs appear anywhere on the reels and explode, a randomly chosen icon replaces all icons affected by the explosion.

Fortune Frog is playable on the go through a mobile phone. The game is mobile-optimized thanks to the HTML 5 technology, and thus can be played on browsers on iPhone, Android, iPad, other smartphones, and tablets. Players can also play the game from a desktop and don’t need to download another feature. Players can find the Fortune Frog icon and click or tap on it to load and play the slot. After loading, begin to play by pressing the play button or the autoplay.