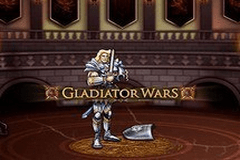 An August 2013 release, Gladiator Wars slot game is a well-designed slot game that features a historical theme and a series of furious gladiators.

Although this slot is not the first battling oriented game from RTG, the brand takes a unique approach to give players more than the usual mediocre experience. The unique approach makes Gladiator Wars one of the most interactive releases by RTG. The developers have done a great job in ensuring to incorporate furious gladiators on a grid with many pay lines, ensuring a player is not tied down to a few skills or moves.

How to Play Gladiator Wars

Playing Gladiator Wars is pretty straightforward as the player has to first update the stake amount between $0.25 and $125 and then press the play button on the screen. To continue, a player has to select an opponent to beat down and choose the areas on the opponent’s body they wish to target.

As it is a complicated round, the player needs to think strategically before executing a move. Otherwise, they risk failing. Ideally, the goal is to wound the opponent or kill before the opponent can attack the player and lose it. When a player wins, they get a prize and another round to fight an opponent. This happens for eight rounds as long as the player doesn’t miss hitting the challenger.

Gladiator Wars comes with various symbols with the white, red, black, and queen gladiators, being the game’s highest paying symbols. Other symbols in the game include K, Q, A, J, 10, and 9. A combination of three or more symbols on a line from left to right leads to payout depending on the amount wagered and symbols on a pay line.

The sword and the shield symbols serve as the game’s wild symbols and appear anywhere on reels 2,3, and 4 to create winning combinations. A Coliseum with a word scatter is the game’s scatter symbol that players must line from three to five to unlock bonus features and a game in an arena.

Three or more scatter characters trigger the gladiator war bonus. When it happens, a player transitions to a gladiator arena where they fight the opponent up to four times before getting back to the usual setting. The accumulated winnings are awarded to the player at the end of the bonus war.

Another bonus feature is the wild symbols which fall on reels two, three, and four. When they do, they replace all other icons except the scatters. If the wild symbol replaces a winning icon, the player is awarded the highest win.

Gladiator Wars comes with a progressive jackpot referred to as the Random Jackpot. The feature seats at the right-hand corner of the game and unlock when a player bets between 0.25 coins and 125.00 coins, with the highest value of coin elevating the chances of triggering the jackpot.

Gladiator Wars video slot game is compatible with most devices and platforms including iPhone, Android, iPad, Mac, Windows, tablets, and other smartphones. What’s more, players don’t have to download the game but can play over a browser.