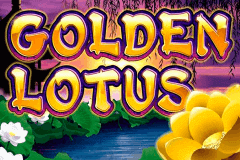 Golden Lotus, a slot game developed by Red Tiger Gaming, is yet another take on Chinese folklore to have appeared on the slot game market. With so many out there along familiar themes, it does mean this game needs to perhaps do something a bit different in order to stand out from the crowd.

What you have with this game is a 5×3 reel that is going to offer you a total of 20 different paylines. The game itself is set around a theme focused on tranquility, while the reels are surrounded by gold. The idea here is to give a sense of heaven around the reels, and even if it doesn’t achieve that for you, it is pleasant to look at without being hit by bold graphics. In this game, the symbols are often Chinese in inspiration, so expect temples, Chinese calligraphy, and golden carps as examples.

How to Play Golden Lotus

This game is no different from others when it comes to how to play it. All you need to do is to select the size of your coin for your bet and then hit spin. To do this, hit the arrow buttons before hitting spin.

First, there is no scatter symbol in this game, so that does reduce the number of potential bonuses that will be available. However, there is a wild symbol, so all is not lost. In this instance, it’s the golden lotus itself that acts as the wild and will turn other symbols into the golden lotus with this boosting your opportunity to win by selecting the symbol you want it to replace. However, strike a payline of golden lotus symbols and you stand to win a number of credits on its own.

Another bonus option is still linked to the lotus symbol. At times, and this happens randomly, the wild can become locked for a number of spins. This further increases your ability to win on a number of paylines but you never know how long the wild is going to hang around for.

Finally, land the Chinese goddess with the lotus symbol and it triggers a bonus free spin.

Betting and Payouts for Golden Lotus

The minimum coin size for this game is $0.01 while the maximum is $25 which is a big range. It does appear that this game offers a wide range of prizes for all kinds of combinations, but the top jackpot is set at 800 coins which you receive with different lotus combinations. Apart from that sum, various other prizes will vary from a few coins to payouts in the region of 40 to 75 credits.

This game does promise quite a lot, but it does seem to be slightly lacking in areas. The payouts can be quite confusing, but they are often so that do make a difference. The gameplay is certainly smooth, but it’s perhaps best for low-rollers to play as opposed to others that are looking for a more serious slot game to play online.