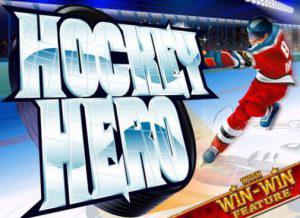 As the name goes, the Hockey Hero Slot is a hockey-themed slot from Push Gaming with 5 reels and 40 pay lines.

This slot offers a player an opportunity to play with real hockey stars are teammates on their betting journey to victory which in this case leads to financial rewards. The ambiance of the game is very impressive, with clean and pleasing to the eyes visuals. The sports-themed slot offers free spins along with the hold and respin feature. The Hockey Hero offers a return to player percentage of 96.53% (RTP).

How to Play Hockey Hero

The Hockey Hero slot game is played across 5 reels with 4 rows and 40 pay lines. The game is played on a massive ice rink, littered with fans cheering their players on, on the walls are flags of successful Ice Hockey countries. Like most slot games, you are expected to choose your bet size, which ranges from a minimum of $0.40 and expands to a maximum of $100. A single spin requires 40 coins, but a player is allowed to alter the coin denomination.

You can choose to spin the reel manually via the spin button or select the autoplay option to automatically spin up to 100 times. Winning can be easy, as you are expected to match at least two symbols of the same kind across a pay line to get a win. This, however, applies to the three stacked high-value symbols, the matching of regular symbols for a win is pegged at a minimum of three of the same kind.

The three high-value symbols include the Red Player, who is the team leader and also the leading goal scorer. The Blue player is next in value as the Red Player symbol pays the most, and he is the player with the most assists. The Green Player is the third and final high-value symbol and is in charge of the defense.

Another symbol on this slot is the Trophy Wild, which is designated as a joker, and it substitutes for all regular symbols. The Goal is represented as a scatter, and it triggers the free spin feature.

You will trigger the hold and respin feature upon completely filling up reel 1 with either red, blue, or green players. After which, the corresponding stacked symbols on reel 1 become target characters. Then a respin is offered, with all the target icons and wild symbols on the reels maintaining their position while the respin is on.

The free spin feature is the main bonus round offered by Hockey Hero. The landing of Goal scatters on the reels (which can be found in reels 1, 3, and 5) in any position at all, triggers the free spin, awarding the players five bonus games. During the round, a random multiplier of 2X, 3X, or 4X plus a player symbol that will apply to all winnings will be selected. The randomly selected player will be the only stacked high-value symbol appearing on the reels with wilds and other standard symbols.

The Hockey Hero slot is available on desktop, mobile, and tablet devices. It can be accessed and played on android and iOS devices on the go, including iPhones, iPads, and Macbooks.