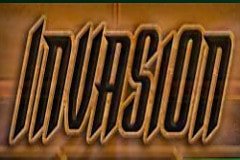 Created by RTG, Invasion is a slot game with an apparent RTP in the region of 97%. Now, if true, then that’s huge and way above the industry average, but what else should you be expecting from this slot game?

So, what’s this game all about? Well, it turns out the planet is in danger and only you can help it, so this is a sci-fi themed game. As long as you think of aliens and flying saucers, mixed in with some retro graphics, then you have the theme summed up. Even the reels, of which there are 5 along with 243 ways to win, are framed by alien-like symbols.

The basic idea is that the ‘invasion’ aspect comes from aliens, but by landing various wins along the way it’s hoped that you can stop it. From a concept perspective, this game looks cool and it does also appear to play well.

How to Play Invasion

One thing we hate is a slot game that is too complicated to play, but thankfully this game isn’t like that. As the paylines are constantly in play, it does mean you don’t need to worry about a bet per line. Instead, you need to decide how much you will bet per spin and then hit the spin button. Alternatively, you can use the autoplay option if you would like to speed things up, but then you best be happy with your bet size as it will fly through the spins and it could end up costing you a lot of money.

The game does come with both wilds and other bonus symbols, and in this instance, it’s the resistance logo that acts as the wild. Here, it can only land on reels 2, 3, or 4, but all they do is swap in for other symbols that will then boost your chances of landing a winning payline.

The scatter is the invasion logo, and they won’t only give you the chance for a huge payday but it also offers the opportunity to play the special bonus game. With this game, you get to target alien spaceships with each one offering you bonuses. Land the mothership, and you will then get all the bonuses which are cool.

Betting and Payouts for Invasion

The bet range available on this game ranges from 0.25 credits up to a maximum of 125 credits. Now, if you play with a $1 coin, then that is an impressive bet. The maximum win is going to be 1000x your wager, and you need to land five of the flying saucers in a row to get this payout. Of course, card symbols are at the lower end of the payout range, but that jackpot is quite cool if you are lucky enough to land it.

Overall, this game does do something different with the bonus game where you can at least have some extra fun as you hopefully build those bonuses. Aside from that, the theme is cool and a whole lot of fun even if the rest of the slot game is along the same lines as you would generally see everywhere else.