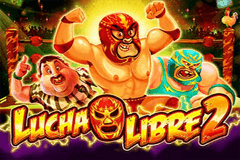 Lucha Libre 2 is a clear follow-up to the previously successful Lucha Libre slot game by RTG. It means we are going back to this Mexican wrestling theme, but is there anything different from its predecessor?

The first thing to note is that this game still has 5 reels, but it now has 30 paylines instead of 25. The reels are still set against a wrestling ring backdrop, while the symbols are still quite comical, along with having some new additions to those that previously existed. In addition to the wrestlers, peppers, and tequila, we now have fans getting in on the action with the symbols being bright and a whole lot of fun.

How to Play Lucha Libre 2

The main bonus feature is the wrestler’s wild symbols, and they can pop up on reel 3 at any point and cause chaos. Well, the good thing is that chaos is a positive thing for us at this point, as they can boost your chances of grabbing some winning lines thanks to swapping out symbols. Also, along with this being a stacked feature, it does give you a multiplier of up to 10x your bet, along with the wilds jumping to other reels to further increase your chances of getting even bigger wins.

However, there’s also the scatters option, where you are looking for the Mucho Mayhem symbol. At this point, you get to choose a wrestling move, just like the previous version, and see which prize you then end up winning. Also, if you land the fists symbols on reels 1 or 2 while you have the wrestler wild on 3, it leads to a series of re-spins.

Betting and Payouts for Lucha Libre 2

This game has coin sizes that range from 0.01 to 1. The maximum payout you can ever hope to receive is 50,000X your bet per line, which is pretty impressive. However, this is only achieved when you have the maximum bet, but if you do manage to trigger the wrestler bonus game, then the multipliers can make a difference. The maximum bet is also capped at $150 per spin, so this is slightly lower than you may see elsewhere, while the game itself has an RTP of somewhere in the region of 95%, pretty standard for a slot.

Overall, Lucha Libre 2 is pretty similar to the original version, even though the graphics are a bit slicker and more up to date than the first game. That aside, you can expect the same kind of gameplay here and the same amount of fun, so if you love Mexican wrestling and enjoyed the first version, then this game should also appeal to you.