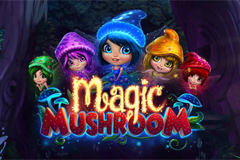 Magic Mushroom is a slot game developed by RTG that has a fantasy, fairy style theme. Of course, fairies have appeared in various slot games, and that’s why we need to look out for anything in the game that makes this different from the rest.

First of all, this game is different in that it only has 3 reels, although it does still offer 27 different paylines. The game does have colorful graphics with the reels being set in a fantasy forest, and that feeling is carried over into the symbols that pop up on the reels. In this instance, look out for the likes of thread, books, candles, and mandolins, while you do also want to land some of the fairies that appear as well.

How to Play Magic Mushroom

The only thing that you need to do in order to play this game is to set the size of your bet. Do this by changing the bet value while you can also then speed up the rate at which the reels will spin if you find that things take longer than you would have liked. Aside from that, you only have to go ahead and hit ‘Spin’ to see how the reels land for you.

There are a couple of bonus features included in this game that will add a bit of extra fun to proceedings. First, the mushroom symbol acts as the wild, and it will expand over the reels by substituting itself for other symbols. Next, there’s the re-spin feature, and you trigger this when reel 2 contains wilds. At this point, reel 2 doesn’t move while you spin the other reels. Land a screen full of wilds, and you then win the jackpot, but this is clearly going to be quite rare.

Aside from those two aspects, there are no other bonus features included in the game, which means there’s no scatter symbol.

Betting and Payouts for Magic Mushroom

The payouts are where things do get really interesting with this game, as the jackpot is set at an impressive $54,000. However, this is due to them paying out at 540x your stake if you land that screen full of wild symbols. Of course, to then receive this jackpot you need to have placed the maximum bet, which is set at $100 a spin. However, if you want to spend a bit less than that per spin, then you can do so for as little as $0.20. You should also know that this game has an RTP of 96.4%, which is slightly higher than the average.

Magic Mushrooms is a cool little game that does offer you a pretty impressive chance to win, even though it only contains 3 reels. The payouts can be huge in relation to the size of your bet, while the game can be fast and furious especially when you speed up those reels with each spin. Overall, even if you aren’t too keen on the fairy idea as a theme, there’s enough in this game to grab your interest.