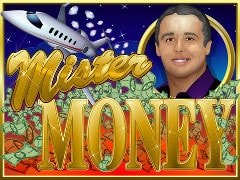 Released in January 2006, Mister Money is undeniably one of the earliest entrants into the online slot industry. Designed by Real Time Gaming, Mister Money offers players huge bonuses, multi-dimensional graphics, and seamless game-play. On top of that, the Mister Money slot game also comes with a myriad of special features including multipliers, scatter, and wild symbols.

The main star of the game is Mister Money who’s quite generous, providing players with lots of rewards and bonuses. Players can wage as little as $0.01 to a max of $100 per spin. A progressive jackpot is also available, which can be won randomly after every spin.

How to Play Mister Money

Mister Money features 20 different pay lines, giving players plenty of wagering options. In addition, Mister Money also offers players an RTP of 95%, which is standard. If players land three or more Red Diamonds, then the bonus game will be automatically activated. To get the reels fired up, players will have to first adjust the bet amount and the pay lines before clicking on the “Spin” button. The first task for players will be to pick out the money bags which will either reveal additional or free multipliers.

Like many other slot games, Mister Money comes with the Autoplay feature, which allows players to play the game on autopilot. The Autoplay button is located at the bottom of the screen between the Bet and Lines feature. To adjust the bets and lines before proceeding with the game, players can momentarily turn this feature off.

The Mister Money slot game features a variety of luxurious items as the game’s main symbols. These include diamonds, gold watches, high-end cars, and stacks of cash. The White Diamond serves as the game’s wild symbol and can substitute all the other symbols to create a winning combination. Moreover, the wild symbol can also replace the scatter symbol in the game, which is quite rare. Once the winning combination comes into play, all resulting winnings will be doubled instantly.

The Red Diamond serves as the game’s scatter symbol. However, it’s important to note that this is not a classic scatter symbol and thus cannot play anywhere on the reel, as seen on other slots. It only plays right to left and left to right. The wild symbol, which is the White Diamond, can replace the Red Diamond symbol. Landing three or more scatter symbols will trigger a special feature where the player will have an option of picking 3.4 or 5 out of 15 money bags. The prizes are added instantly to a 2x multiplier and 5 free spins. The feature can also be retriggered to generate 25 more free spins.

Being compatible with both mobile devices and PCs, players can easily access Mister Money slot games on the go. Furthermore, when playing this slot game at their favorite casinos, players will be able to switch seamlessly from their personal computers to their mobile phones while retaining the same VIP progress, wallet, and user accounts.

If you’ve ever dreamed of driving fast cars, cruising on an expensive yacht, or stacking tons of cash, then this game is for you. While the game offers players plenty of bonuses, the RTP is slightly lower in comparison to other RTG titles. Nonetheless, Mister Money still offers players solid gameplay with plenty of opportunities to score some wins.