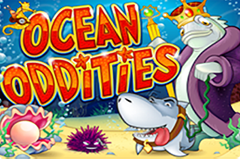 Ocean Oddities is an RTG title designed with odd and comical characters and great background music, all creating an immersive gaming experience.

Designed by RTG, Ocean Oddities features strange animals such as a barking shark and a snail that’s friends with a seahorse. While everything in this slot game is odd, the gameplay is quite interesting. Set underneath the calm ocean waters, Ocean Oddities is a 5-reel and 25 paylines video slot game with the reels arranged in a 5×3 format. There are two jackpots in this slot game- minor and major, which can be randomly won after every spin. While it may take you quite some time to get used to the game, everything will become quite interesting once you get the hang of it.

Symbols in this slot game include a snail riding a seahorse, king cod, a flying fish, an ill-tempered lobster, Pearl, and a variety of poker symbols including the common A, K, and Q. Ocean oddities also has a bonus feature where players will receive up to 10 free spins.

How to Play Ocean Oddities

Playing Ocean Oddities is relatively straightforward. All the player has to do is select their bet and choose the lines they would like to play. Once everything is in order, the player will have to click the Spin button. Alternatively, players can also use the Autoplay feature, where the software will spin the reels automatically, and you can stop the spin when you want. Players are paid based on the symbols that line up on paylines. The bet per line is customizable, and players can choose between $0.01 and $5 per line. Players can also customize the lines using arrows to raise or lower the number of lines.

The Pearl, which is the scatter symbol, offers more excitement and leads to bigger payouts. Hitting three or more scatters will give players the chance to play 10 free games. The bonus feature will definitely come in handy in case of a lackluster gaming round. Even with a small stake, players can still record big winnings. When Rex pops up during the bonus round, players’ earnings will be doubled.

The Ocean Oddities slot game features a variety of symbols including the Pearl symbol, which serves as the scatter. Hitting Pearl is excellent since the wins will get added to line wins and get multiplied by the total bet. Another important symbol in this game is a Rex symbol, which serves as the wild symbol and can substitute all the other symbols in the game for a winning combination. Rex can only appear on the 5th, 4th, 3rd, and 2nd reels.

The ocean is an endless abyss, and the rewards in this game feel bottomless. Ocean Oddities features two progressive jackpots, minor and major, which can be won randomly. The major jackpot can fetch up to $1,000 while the minor jackpot can fetch players max of $250.

You can play Ocean Oddities on the go, as it is compatible with a number of devices including mobile phones, tablets, and PCs. While the characters in this game are quite strange, this slot game will definitely take you on a roller coaster ride.