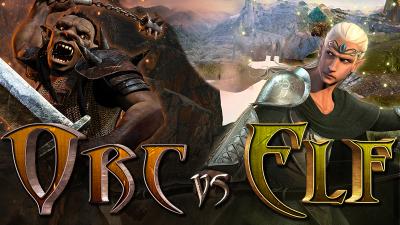 Powered by RTG, Orc Vs. Elf is a highly engaging slot game inspired partly by the Lord of The Rings film franchise. Apart from the amazing 3D graphics, this slot game also features great animations and melodious sound effects. Like other RTG titles, the game’s layout comprises 3 rows, 5-reels, and 20 paylines, which is the standard setup for many RTG video slot games.

Overview of Orc Vs. Elf

The paylines in this slot game are not customizable, though players have a chance to change the value of their wagers. Symbols in this slot differ from that of most games, depicting the dangerous and hellish existence of orcs or the enthralling lifestyle enjoyed by elves. Some of the symbols found in this slot game include the orc’s sword, the elf’s bow, as well as skull piles from orc’s world, and elf’s potion. The Orc vs Elf slot game also comes with several bonus features such as The Road to Elveros and Trail to Orcholme, all of which reward players handsomely.

How to Play Orc Vs. Elf

Orc Vs. Elf comes with an impressive design for a seamless play experience. It features 25 pay-lines and 5 reels, great winning chances, nice payouts, and a flexible betting range. It has a minimum bet of $0.25 and a maximum of $6.25. Orc and Elf castle pays out 1000 coins each.

Bonus Features for Orc Vs. Elf

There are seven elf features on the road leading to the Citadel of Elveros, and seven orc features on the road to the Fortress of Orcholme. Just like it is the case with the scatter symbols, there are also two wild symbols – the orc and the elf. The elf is the expanding wild and will only show up on the fifth reel. It substitutes all the other symbols except the orc shield. On the other hand, the orc is the expanding wild and will only appear on the first reel. It can substitute all the other symbols except for the elf shield.

The Orc Vs. Elf comes with three bonus features;

Compatibility of Orc Vs. Elf

Orc Vs. Elf is compatible with mobile devices to allow players to play on the go. The mobile version of the game is similar to the desktop version.